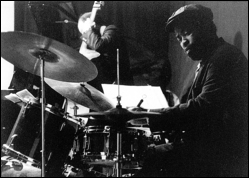 Doug Hammond (born December 26, 1942) is a free funk/avant-garde jazz drummer, composer, poet, producer and professor from Tampa, Florida, U.S.A. His first major release was Reflections in the Sea of Nurnen on Tribe Records in 1975.

He currently lives and works in Linz, Austria. He was a professor at the Anton Bruckner Private University for Music, Drama, and Dance in Linz.

This article uses material from the article Doug Hammond from the free encyclopedia Wikipedia and it is licensed under the GNU Free Documentation License.

I Will Dance (When I Walk Away) Katzenjammer
Update Required To play the media you will need to either update your browser to a recent version or update your Flash plugin.