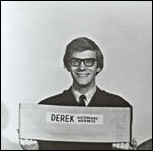 Leckenby was born in Leeds, West Yorkshire. He was educated at William Hulme's Grammar School, Manchester, and commenced a civil engineering degree course at Manchester University, before leaving to become a professional musician.

An accomplished guitarist and musician, he played the lead guitar for Herman's Hermits. He played on many of the band's early hits and composed songs with band mates Keith Hopwood, Peter Noone and Karl Green. He admired their record producer Mickie Most, but was bothered at times by Most's use of session musicians on the band's mid career hits, despite the Hermits' more than acceptable skills as players. Leckenby played on all the band's US and UK Number One hits and provided the solo on "Henry the Eighth". Karl Green commented on VH1's My Generation-Herman's Hermits that Most's use of session musicians on some of the band's records was unfair to Leckenby in particular. During the 1970s and 1980s Leckenby tried to set the record straight with the rock media explaining the large body of guitar playing he contributed to the band's records. Even the band's US label ABKCO failed to credit the Hermit's playing in the liner notes to its retrospective on the band. Leckenby's skills are apparent not only on Herman's Hermits records, but also on videos of the band's live appearances including the 1965 NME music awards and Herman's Hermits Hilton Show. Additionally, Leckenby can be heard on several releases by Hopwood's Pluto Music, including the compilation album, Vault 69.

Leckenby is credited with arranging the band's first big hit, "I'm into Something Good". His skill on guitar and later dobro are on releases such as the LP A Whale of a Tale, and the later singles such as, "Ginny Go Softly" and "Heart Get Ready for Love".

Despite the split with Noone, Leckenby always spoke highly of his friend and defended the singer's vocal abilities to critics. Noone also praised Leckenby's talent in numerous interviews over the years.

This article uses material from the article Derek Leckenby from the free encyclopedia Wikipedia and it is licensed under the GNU Free Documentation License.

Be With You Enderlin Chicks
Update Required To play the media you will need to either update your browser to a recent version or update your Flash plugin.