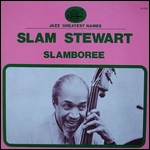 Leroy Eliot "Slam" Stewart (September 21, 1914December 10, 1987) was an African American jazz bass player whose trademark style was his ability to bow the bass (arco) and simultaneously hum or sing an octave higher. He was originally a violin player before switching to bass at the age of 20.

Stewart was born in Englewood, New Jersey on September 21, 1914, and began playing string bass while attending Dwight Morrow High School.[1] While attending the Boston Conservatory, he heard Ray Perry singing along with his violin. This gave him the inspiration to follow suit with his bass. In 1937 Stewart teamed with Slim Gaillard to form the novelty jazz act Slim and Slam. The duo's biggest hit was "Flat Foot Floogie (with a Floy Floy)" in 1938 (see 1938 in music).

Stewart found regular session work throughout the 1940s with Lester Young, Fats Waller, Coleman Hawkins, Erroll Garner, Art Tatum, Johnny Guarnieri, Red Norvo, Don Byas, the Benny Goodman Sextet, and Beryl Booker, among others. One of the most famous sessions he played on took place in 1945, when Stewart played with Dizzy Gillespie's group (which featured Charlie Parker). Out of those sessions came some of the classics of bebop such as "Groovin' High" and "Dizzy Atmosphere."

Throughout the rest of his career, Stewart worked regularly and employed his unique and enjoyable bass-playing style. He taught at the State University of New York at Binghamton, New York, and at Yale University. He died on December 9, 1987 in Binghamton.

This article uses material from the article Slam Stewart from the free encyclopedia Wikipedia and it is licensed under the GNU Free Documentation License.

Weak In The Presence Of Beauty Alison Moyet
Update Required To play the media you will need to either update your browser to a recent version or update your Flash plugin.