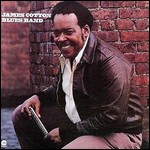 James Henry Cotton (July 1, 1935 – March 16, 2017)[1] was an American blues harmonica player, singer and songwriter, who performed and recorded with many of the great blues artists of his time and with his own band. He played drums early in his career but is famous for his harmonica playing.

Cotton began his professional career playing the blues harp in Howlin' Wolf's band in the early 1950s.[3] He made his first recordings in Memphis for Sun Records, under the direction of Sam Phillips. In 1955, he was recruited by Muddy Waters to come to Chicago and join his band. Cotton became Waters's bandleader and stayed with the group until 1965.[4] In 1965 he formed the Jimmy Cotton Blues Quartet, with Otis Spann on piano, to record between gigs with the Muddy Waters band. He eventually left to form his own full-time touring group. His first full album, on Verve Records, was produced by the guitarist Mike Bloomfield and the singer and songwriter Nick Gravenites, who later were members of the band Electric Flag.[5]

Cotton was born in Tunica, Mississippi. He became interested in music when he first heard Sonny Boy Williamson II on the radio. He left home with his uncle and moved to West Helena, Arkansas, finding Williamson there. For many years Cotton claimed that he told Williamson that he was an orphan and that Williamson took him in and raised him, a story he admitted in recent years is not true. However, Williamson did mentor Cotton during his early years.[3] Williamson left the South to live with his estranged wife in Milwaukee, Wisconsin, leaving his band in Cotton's hands. Cotton was quoted as saying, "He just gave it to me. But I couldn't hold it together 'cause I was too young and crazy in those days an' everybody in the band was grown men, so much older than me."

Cotton played drums early in his career but is famous for his harmonica playing. He began his professional career playing the blues harp in Howlin' Wolf's band in the early 1950s.[3] He made his first recordings as a solo artist for Sun Records in Memphis in 1953.[3] In 1954, he recorded an electric blues single "Cotton Crop Blues", which featured a heavily distorted power chord–driven electric guitar solo by Pat Hare.[6] Cotton began working with the Muddy Waters Band around 1955.[3] He performed songs such as "Got My Mojo Working" and "She's Nineteen Years Old", although he did not play on the original recordings; Little Walter, Waters's long-time harmonica player, played for most of Waters's recording sessions in the 1950s. Cotton's first recording session with Waters took place in June 1957, and he alternated with Little Walter on Waters's recording sessions until the end of the decade.

In 1965 he formed the Jimmy Cotton Blues Quartet, with Otis Spann on piano, to record between gigs with Waters's band. Their performances were captured by producer Samuel Charters on volume two of the Vanguard recording Chicago/The Blues/Today! After leaving Waters's band in 1966, Cotton toured with Janis Joplin while pursuing a solo career.[3] He formed the James Cotton Blues Band in 1967. The band mainly performed its own arrangements of popular blues and R&B from the 1950s and 1960s. Cotton's band included a horn section, like that of Bobby Bland's. After Bland's death, his son told news media that Bland had recently discovered that Cotton was his half-brother.[7]

In the 1970s, Cotton recorded several albums for Buddah Records. He played harmonica on Waters's Grammy Award–winning 1977 album Hard Again, produced by Johnny Winter. In the 1980s he recorded for Alligator Records in Chicago; he rejoined the Alligator roster in 2010.[8] The James Cotton Blues Band received a Grammy nomination in 1984 for Live from Chicago: Mr. Superharp Himself!, on Alligator, and a second for his 1987 album Take Me Back, on Blind Pig Records. He was awarded a Grammy for Best Traditional Blues Album for Deep in the Blues in 1996.[9] Cotton appeared on the cover of the July–August 1987 issue of Living Blues magazine (number 76).[10] He was featured in the same publication's 40th anniversary issue of August–September 2010.

In 2006, Cotton was inducted into the Blues Hall of Fame at a ceremony conducted by the Blues Foundation in Memphis. He has won or shared ten Blues Music Awards.[11]

Cotton battled throat cancer in the mid-1990s, but he continued to tour, using singers or members of his backing band as vocalists. On March 10, 2008, he and Ben Harper performed at the induction of Little Walter into the Rock and Roll Hall of Fame, playing "Juke" and "My Babe" together; the induction ceremony was broadcast nationwide on VH1 Classic. On August 30, 2010, Cotton was the special guest on Larry Monroe's farewell broadcast of Blue Monday, which he hosted on radio station KUT in Austin, Texas, for nearly 30 years.[12]

Cotton had worked with many prominent artists, including:

This article uses material from the article James Cotton from the free encyclopedia Wikipedia and it is licensed under the GNU Free Documentation License.

Give Me The Reason James Bay
Update Required To play the media you will need to either update your browser to a recent version or update your Flash plugin.