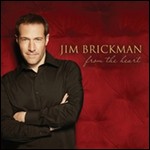 Jim Brickman (born November 20, 1961) is an American songwriter and pianist of pop music, as well as a radio show host. Brickman has earned six Gold and Platinum albums. He is known for his solo piano compositions, pop-style instrumentals, and vocal collaborations with artists such as Lady Antebellum, Johnny Mathis, Michael W. Smith, Martina McBride, Megan Hilty, Donny Osmond, Delta Goodrem, Olivia Newton-John, and many others.[1] He has earned two Grammy nominations for his albums Peace (2003) for Best Instrumental, and Faith (2009) for Best New Age Album;[2] an SESAC "Songwriter of the Year" award; a Canadian Country Music Award for Best Vocal/Instrumental Collaboration; and a Dove Award presented by the Gospel Music Association.

Since 1997, he has hosted his own radio show, "The Jim Brickman Show", which is carried on radio stations throughout the United States.[3] Brickman has also released five PBS specials, and hosts an annual fan cruise. He is founder of Brickhouse Direct, a company that provides strategic marketing and e-commerce solutions for clients in a variety of industries.

Brickman was born and raised in Shaker Heights, Ohio and attended Shaker Heights High School. He began playing piano at the age of five. Later he studied composition and performance at the Cleveland Institute of Music while taking business classes at Case Western Reserve University.[4] In 1980, Brickman founded his own advertising music company called The Brickman Arrangement,[5] writing commercial jingles for many companies across the country such as McDonald's, Pontiac, City of Cleveland, Ohio Lottery, and Isuzu.[6]

Brickman signed to Windham Hill Records in 1994 and released his first album, No Words featuring the song "Rocket to the Moon" which became his first solo instrumental to be ranked on the Billboard charts.[7] The songs "Angel Eyes" and "If You Believe" gained radio airplay from Brickman's second release, By Heart on the Windham Hill label in 1995. The following year, the CD's title track, "By Heart", became his first top 20 adult contemporary (AC) hit. In 1997, Brickman released the album Picture This,[8] adding a vocal performance, "Valentine", sung by Martina McBride.[9] This song charted on both country and AC stations, with the album selling platinum.[10] By the end of the year, Brickman issued the first of many Christmas CDs, The Gift, with the title song featuring Collin Raye and Susan Ashton, topping three different charts; for this album, Brickman received a Dove Award from the Gospel Music Association.[11] He later produced several other Christmas-themed albums, Peace (2003), Christmas Romance (2006), Homecoming (2007), and The Hymns and Carols of Christmas (2008);[12] and his two albums Grace (2005) and Faith (2008) concentrated on arrangements of well-known Christian music.[13]

Brickman composes a variety of music. Besides his piano compositions and love songs, he has also drafted arrangements of existing songs, and several of his albums feature arrangements of children's music. He has collaborated with artists from all genres with songs like "Love of My Life" with Michael W. Smith, "You" with Jane Krakowski, "Never Alone" with country group Lady Antebellum, "After All These Years" with Anne Cochran, and "Never Far Away" with Christian contemporary group Rush of Fools, among others.

Brickman's music is sometimes classified in the new-age genre, although the diversity of his music makes Brickman himself skeptical of this classification.[17]

In 2007, Brickman teamed up with Somerset Group Ltd., producing and distributing concept-based music to some of the country's biggest retailers including Target, Bed Bath & Beyond, Walmart, and Costco.

Making its debut in January 1997, "Your Weekend with Jim Brickman" is a four-hour radio show that has been heard across the US featuring music blended with celebrity interviews, lifestyle features and entertainment reports.[18]

Since 2006, Brickman has hosted an annual fan cruise, being joined at sea with his fans for a week of activities and concerts.

In 2013, the first annual "Brickman Bash" kicked off in Nashville on July 18–21. Fans would spend a weekend with Brickman touring Franklin and Nashville, TN.

Brickman appeared on the September/October 2013 cover of Making Music Magazine to discuss his life and career.[21]

This article uses material from the article Jim Brickman from the free encyclopedia Wikipedia and it is licensed under the GNU Free Documentation License.

I'm Very Sorry Peter Uehlinger
Update Required To play the media you will need to either update your browser to a recent version or update your Flash plugin.