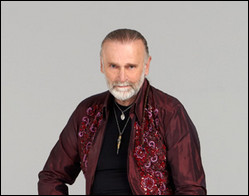 Born in Paterson, New Jersey, Hossack, known as "Big Mike" to his former band members, started playing drums in the Little Falls Cadets, a Boy Scout drum and bugle corps, as well as Our Lady of Lourdes Cadets and Fair Lawn Cadets.[2] His discipline to play alongside other drummers came from the teachings of his instructors Bob Peterson, George Tuttle and Joe Whelan, all to whom he gave much credit.

After graduating high school, he served for four years in the United States Navy during the Vietnam War. After being honorably discharged in 1969, he returned home to New Jersey to pursue a career in law enforcement, but a close friend talked him into auditioning for a California-based band called Mourning Reign. After a grueling stint in upstate New York, the band relocated to the San Francisco bay area and signed with a production company that had also signed the newly formed rock band, the Doobie Brothers.

Although Mourning Reign was short-lived, Hossack's abilities gained considerable exposure and having learned of his availability, was invited to jam with the Doobies in 1971. Little did he know that the "jam session" was an actual audition which took place at Bimbo's 365 Club. After hearing founding drummer John Hartman and Hossack together, the Doobies decided that having two drummers would beef up the rhythm section and so adopted the "dual drummers" sound pioneered by bands such as the Grateful Dead and Allman Brothers. Hossack played alongside Hartman on the band's breakthrough albums Toulouse Street in 1972, The Captain and Me in 1973 and What Were Once Vices are Now Habits in 1974, which spawned the band's first #1 hit, "Black Water".

After a grueling ten-month tour in 1973, Hossack left the Doobies. He went on to join the band Bonaroo which released one album then disbanded shortly afterwards. In 1976, he had a brief stint with a band called DFK (or the Dudek Finnigan Krueger Band), with Les Dudek, Mike Finnigan and Jim Krueger. In 1977, Hossack became a partner in Chateau Recorders studio in North Hollywood. An avid outdoors man, when Mike wasn't in the studio or on tour, he was either riding his Harley-Davidson motorcycle, hunting or fishing. A family man as well, Mike enjoyed spending as much time as possible raising his two children.

In 1987 former band member Keith Knudsen called Mike and asked if he would participate in a series of benefit concerts for veterans of the Vietnam War. Being a veteran himself, Mike agreed and the Doobie Brothers (after a five-year hiatus) were back together again. Due to the huge success of these concerts, the Doobie Brothers decided to reform with the original band members Pat Simmons, Tom Johnston, John Hartman, Tiran Porter and Michael Hossack. Not long afterwards, they were offered a recording contract from Capitol Records. Since then, Mike's unique style can be heard on the albums Cycles, Brotherhood, Rockin' down the Highway: The Wildlife Concert, Sibling Rivalry, Live at Wolf Trap and World Gone Crazy.

On June 22, 2001, while heading to a show at Caesars Tahoe in Lake Tahoe, Mike suffered multiple fractures from a motorcycle accident on Highway 88 and had to be airlifted to a Sacramento-area hospital where he underwent surgery. After months of healing and grueling physical therapy, Mike was back with the band. He was a permanent fixture until he developed cancer in 2010 and had to take a leave of absence to focus on his health.

In 2012, Hossack died of cancer at his home in Dubois, Wyoming at the age of 65.[3] He is survived by his son Mike Jr., his daughter Erica Rose and his brother Eric.

Selected discography with the Doobie Brothers

This article uses material from the article Michael Hossack from the free encyclopedia Wikipedia and it is licensed under the GNU Free Documentation License.

Here We Go Moritz
Update Required To play the media you will need to either update your browser to a recent version or update your Flash plugin.