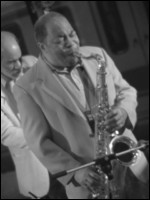 Herman Riley (August 31, 1933 – April 14, 2007) was a tenor saxophone jazz performer. Born in New Orleans, Louisiana, he was noted for his performances with, among others, Count Basie, Etta James and Jimmy Smith.

This article uses material from the article Herman Riley from the free encyclopedia Wikipedia and it is licensed under the GNU Free Documentation License.