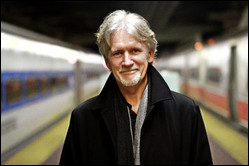 Broadbent studied piano and music theory in his own country, but in 1966 went to the US to study at the Berklee College of Music.[1] Alan Broadbent's first professional gig was in a jazz trio with bassist Kevin Haines and drummer Tony Hopkins at Club 81 in Auckland New Zealand in the mid-1960s.

Broadbent's first two albums, Song of Home and Further Down the Road, were recorded in 1985 in New Zealand on the Tartar label (respectively TRL-043 and TRL-052). Broadbent is joined on those recordings by Andy Brown (bass) and Frank Gibson, Jr. (drums). Those early albums show a fascination (which still characterizes Broadbent's work) with reinterpreting a broad range of standards; he covers material as diverse as "What is this Thing Called Love?" (Cole Porter) and "Oleo" (Sonny Rollins). Further Down the Road also shows Broadbent's increasing confidence as a composer (the title tune, "Nictation" and "Don't Ask Why").

Broadbent's first U.S. release, Everything I Love, was recorded in Hollywood in April 1986 and released on the Discovery label (DS-929). In this set, Putter Smith replaces Brown on bass; Frank Gibson, Jr. continues with the trio. Again, Broadbent covers standards ranging from Oscar Hammerstein ("Softly as in a Morning Sunrise") to John Coltrane ("Lazy Bird"), and contributes two original compositions ("Continuity" and "Mendocino Nights").

In the early 90s he was asked to be a part of Natalie Cole's famous "Unforgettable" cd, at which time he toured as her pianist and, a little while later, as her conductor. At this time he wrote an orchestral arrangement for her second video with her dad, "When I Fall In Love", which won him his first Grammy for "Best Orchestral Arrangement Accompanying a Vocal".[2]

During the 1990s Broadbent was part of Charlie Haden's "Quartet West."[3]

It was while he was with Charlie Haden's Quartet West that he won his second Grammy, an orchestral accompaniment written for Shirley Horn of Leonard Bernstein's "Lonely Town".As a soloist and with his jazz trio, Broadbent has been nominated for Grammys twice for best instrumental performance, in the company of such artists as Herbie Hancock, Sonny Rollins and Keith Jarrett. In 2007 he was awarded the New Zealand Order of Merit, an honor he holds in high regard.

Broadbent is Diana Krall's conductor for her occasional orchestra concerts and is the conductor on her "Live in Paris" DVD. Recently he has been the arranger on Glenn Frey's cd with strings, "After Hours", and wrote six string arrangements for Sir Paul McCartney's "Kisses On The Bottom" with the London Symphony. He has just returned from solo piano concerts in the UK, Poland and France. It has been his lifelong goal, through his orchestral arrangements and jazz improvisations, to discover, in popular music and standard songs, deeper feelings of communication and love.[4]

In the November 2013 issue of downbeat Magazine his trio CD, Heart To Heart garnished a rare 5 star rating.

As a trio, duo or solo artist

This article uses material from the article Alan Broadbent from the free encyclopedia Wikipedia and it is licensed under the GNU Free Documentation License.

Falling Dhenibe
Update Required To play the media you will need to either update your browser to a recent version or update your Flash plugin.