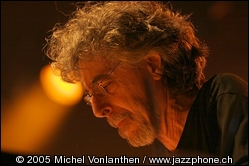 Michael T. Mainieri, Jr. is an American vibraphonist known for his work with the jazz fusion group Steps Ahead.

Mainieri was a pioneer in introducing an electronic vibraphone, known as a synth-vibe, and has recorded with such musicians as Buddy Rich, Wes Montgomery and Jeremy Steig. He performed for a live album by Laura Nyro and was featured on several tracks from the Dire Straits album Love Over Gold (1982), as well as on "Ride Across the River" on the album Brothers in Arms (1985). He performed on the albums Heads by Bob James, Heart to Heart by David Sanborn, and Tiger in the Rain by Michael Franks.

He has also released numerous albums and videos as a leader for a variety of labels, most notably his 1980 album for Warner Bros. entitled Wanderlust, which featured Michael Brecker and other members of Steps Ahead. He produced three albums for Carly Simon. Mainieri married singer-songwriter/harpist Dee Carstensen in 1993.

This article uses material from the article Mike Mainieri from the free encyclopedia Wikipedia and it is licensed under the GNU Free Documentation License.

Your Love Is King Sade
Update Required To play the media you will need to either update your browser to a recent version or update your Flash plugin.