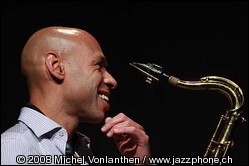 In 1991, he won the Thelonious Monk International Jazz Saxophone Competition.[1]

Joshua Redman was born in Berkeley, California, to jazz saxophonist Dewey Redman and dancer and librarian Renee Shedroff.[2] He was exposed to many kinds of music at the Center for World Music in Berkeley, where his mother studied South Indian dance. Some of his earliest lessons in music and improvisation were on recorder with gamelan player Jody Diamond. He was exposed at an early age to a variety of musics and instruments and began playing clarinet at age nine before switching to what became his primary instrument, the tenor saxophone, one year later. Redman cites John Coltrane, Ornette Coleman, Cannonball Adderley, his father Dewey Redman, as well as the Beatles, Aretha Franklin, the Temptations, Earth, Wind and Fire, Prince, the Police and Led Zeppelin as musical influences.[3]

Redman graduated from Berkeley High School,[4] class of 1986, after having been a part of the award-winning Berkeley High School Jazz Ensemble for all four years of high school. After graduation, Joshua frequented the classroom jam sessions of Bay Area pianist and professor of music (at Laney College in Oakland, California), Ed Kelly. It was there that he performed alongside saxophonist Robert Stewart.[5]

In 1991, he graduated summa cum laude with a degree in Social Studies from Harvard University, where he was a member of Phi Beta Kappa Society. He had already been accepted by Yale Law School, but deferred entrance for what he believed was only going to be one year. Some of his friends had recently relocated to Brooklyn, and they were looking for another housemate to help with the rent. Redman accepted their invitation to move in, and almost immediately he found himself immersed in the New York jazz scene. He began jamming and gigging regularly with some of the leading jazz musicians of his generation and that of his father, including Brad Mehldau, Peter Martin, Mark Turner, Peter Bernstein, Roy Hargrove, Christian McBride, Kevin Hays, Jorge Rossy, Pat Metheny, Charlie Haden and Billy Higgins, among others.

Redman won the Thelonious Monk International Jazz Saxophone Competition in 1991, and began focusing on his musical career. He was signed by Warner Bros. Records and issued his first self-titled album in the spring of 1993, which subsequently earned Redman his first Grammy nomination. He continued to develop his style throughout the 1990s, beginning with a sideman appearance on Elvin Jones' Youngblood alongside Javon Jackson, and following up with an appearance on his father Dewey's 1992 record Choices. On his second album as a leader, Wish, he was joined by a notable lineup consisting of guitarist Pat Metheny, bassist Charlie Haden and drummer Billy Higgins; this group then toured as The Joshua Redman Quartet, featuring Christian McBride in place of Charlie Haden. He continued to work with various quartets, including one with pianist Brad Mehldau until forming a new trio, Elastic, with keyboardist Sam Yahel and drummer Brian Blade. The trio debuted under the moniker Yaya3, producing one album under this name. The same group of musicians made up the core on Redman's Elastic album, before becoming known as the Joshua Redman Elastic Band. Some of his works were featured on The Weather Channel's Local on the 8s. Redman performed in a fictitious supergroup, "The Louisiana Gator Boys", in the 1998 film Blues Brothers 2000, performing on "How Blue Can You Get?" and "New Orleans".

In 1999, Joshua Redman was immortalized in the children's TV show Arthur on PBS. He appeared in the tenth episode of the fourth season, where it was rumored by the characters that he would get in a fight with famed cellist Yo-Yo Ma, who also appeared in the episode.

In 2000, Redman was named Artistic Director for the Spring Season of the non-profit jazz-presenting organization SFJAZZ. Redman co-founded the SFJAZZ with Executive Director Randall Kline, as the SFJAZZ Collective, an ensemble distinguished by the creativity of its members and a primary emphasis on composition. In March 2007, Redman announced that he was taking a hiatus from both the SFJAZZ Artistic Directorship and the SFJAZZ Collective in order to focus on new projects.

In 2006, he performed with the New Zealand Symphony orchestra in composer John Psathas' concerto for saxophone and drumkit, Omnifenix, which was released in Rattle Records' album, View from Olympus. The album won Best Classical Album for 2007 in the New Zealand music awards.

In early 2013, it was announced that Redman would release a new collection of vintage and contemporary ballads featuring a jazz quartet and an orchestral ensemble titled Walking Shadows. Produced by Redman's friend and frequent collaborator Brad Mehldau, the album also features Larry Grenadier (bass) and Brian Blade (drums). It was released on May 7, 2013 on Nonesuch. About Walking Shadows, the New York Times says "there hasn’t been a more sublimely lyrical gesture in his 20-year recording career."

On Sunday, December 8, 2013, Redman joined a group of jazz all-stars onstage at the Kennedy Center Honors in Washington, DC, to pay tribute to honoree Herbie Hancock in performance. The event aired on Sunday, December 29, 2013 at 9:00 PM ET on CBS.

In 2015, Redman received his third Grammy nomination for his solo on "Friend or Foe" from the album The Bad Plus Joshua Redman.

(releases on Warner Bros. and after 2002 on Nonesuch Records)

This article uses material from the article Joshua Redman from the free encyclopedia Wikipedia and it is licensed under the GNU Free Documentation License.

Illusions BBFrances
Update Required To play the media you will need to either update your browser to a recent version or update your Flash plugin.