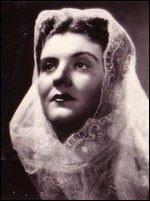 Caniglia was born in Naples and studied at the Music Conservatories of Naples with Agostino Roche. She made her professional debut in Turin as Chrysothemis in Elektra in 1930. The same year she sang Magda in Ottorino Respighi's La campana sommersa in Genoa and Elsa in Lohengrin in Rome and made her debut at La Scala in Milan as Maria in Ildebrando Pizzetti's Lo straniero. She sang regularly at La Scala until 1951 in the leading dramatic soprano roles in opera, such as Un ballo in maschera, La forza del destino, Aida, Andrea Chénier, Tosca, Adriana Lecouvreur etc. She was particularly successful in roles from the latter Verismo school.

On the international scene, Caniglia appeared in venues such as the Paris Opéra, Covent Garden, and the Teatro Colón. She made her debut at the Metropolitan Opera of New York on November 21, 1938, as Desdemona in Otello.

Caniglia participated in the exhumation of a few long forgotten operas such as Donizetti's Poliuto and Verdi's Oberto. She also participated in the creation of many contemporary works: Manuela in Italo Montemezzi's La notte di Zoraima, Milan, 1931, Rosanna in Franco Alfano's Cyrano di Bergerac, Rome, 1936, and the title role of Respighi's Lucrezia, Rome, 1937.

Caniglia was married in 1939 to Italian composer Pino Donati (1907-1975), who was also music director of the Verona Arena, the Teatro Comunale di Bologna, and the Chicago Lyric Opera. She died in Rome, aged 73.

This article uses material from the article Maria Caniglia from the free encyclopedia Wikipedia and it is licensed under the GNU Free Documentation License.

Jung u frei Ritschi
Update Required To play the media you will need to either update your browser to a recent version or update your Flash plugin.