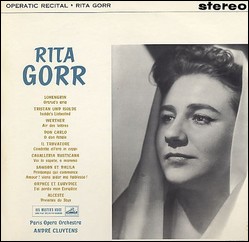 Rita Gorr (18 February 1926 – 22 January 2012)[1] was a Belgian operatic mezzo-soprano. She possessed a large, rich-toned voice and was an intense singing-actress, especially in dramatic roles such as Ortrud (Lohengrin) and Amneris (Aida), two of her greatest roles.[2]

Gorr was born Marguerite Geirnaert into a working-class family in the industrial town of Zelzate, near Ghent, Belgium.[3] After leaving school she worked as a nurse, where the family who employed her discovered her singing and paid for her first lessons.[3] After vocal studies in Ghent with Vina Bovy, and in Brussels with Jeanne Pacquot d'Assy and Germaine Hoerner, she won first prize at the vocal competition of Verviers in 1946, and made her professional debut at Antwerp as Fricka in Die Walküre the same year. She became a member of the Opera of Strasbourg from 1949 to 1952. She won another first prize at the vocal competition of Lausanne in 1952. That year she made her Paris debuts at the Opéra-Comique as Charlotte in Werther on 6 March 1952, and at the Paris Opéra on 31 October as Magdalena in Die Meistersinger von Nürnberg; further roles in Paris included Dalila in Samson and Delilah, Venus in Tannhäuser, Mère Marie in the French premiere of Dialogues of the Carmelites (later in her career she sang Madame de Croissy), Carmen, Geneviève in Pelléas et Mélisande, Amneris in Aida, Eboli in Don Carlos and Marguerite in La damnation de Faust.

Her career then became international in scope, with debuts at Bayreuth in 1958, the Royal Opera House in 1959, La Scala in 1960, the Metropolitan Opera on October 17, 1962 as Amneris. In four seasons at the Met, she sang Santuzza in Cavalleria rusticana, Eboli in Don Carlos, Azucena in Il trovatore, and Dalila. She was a versatile artist, singing with equal success the French, Italian and German repertories. She enjoyed a very long career singing well into her 60s and 70s and her last role was as the Countess in Tchaikovsky's The Queen of Spades which she performed in the summer of 2007 in Ghent and Antwerp.

Gorr believed that 'trouser-roles' did not suit her; she did however sing Lel in The Snow Maiden in 1955 in concert and Octavian in 1958.[4]

Although mainly active on stage, Gorr also sang occasionally in the concert hall, in works by Schumann, Duparc and Wagner; she recorded Mahler lieder.[4]

Gorr can be heard in two of her greatest roles on recordings, Ortrud in Lohengrin, opposite Sándor Kónya and Lucine Amara, under Erich Leinsdorf in 1965, as well as a 1959 version from Bayreuth conducted by Lovro von Matai, and Amneris in Aida, opposite Leontyne Price and Jon Vickers, under Georg Solti. Other recorded roles include Dalila, Margared and Fricka, the latter at Bayreuth under Hans Knappertsbusch. She also recorded excerpts from Orphée et Eurydice (Orphée), Hérodiade (title role) and La damnation de Faust, as well as recitals on Pathé. Gorr can be heard in one of her rarest roles, in an excerpt from Cherubini's Medea (recorded in French) with the Orchestre du Theatre National de l'Opera under George Pretre on ASTX 130502 Pathe-Marconi, while she can be heard in excerpts from two of her Wagner roles, Isolde and Elisabeth, under André Cluytens on Testament SBT1256.[5]

In her later life Gorr made her home in Dénia, Spain.[3] Oresko describes her as giving "the impression of regal grandeur and control by the solidness of her vocal production and a unique gift for instinctive authority".[4]

This article uses material from the article Rita Gorr from the free encyclopedia Wikipedia and it is licensed under the GNU Free Documentation License.

How Could It Come So Far Deuce
Update Required To play the media you will need to either update your browser to a recent version or update your Flash plugin.