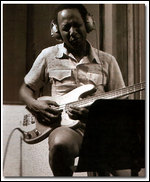 Rainey's youthful pursuits included violin, piano and trumpet. Later, while attending Lane College in Tennessee, Rainey switched to baritone horn to join the school's travelling brass ensemble. While on active military duty, Rainey learned rhythm guitar and began playing professionally with local bands. His lack of improvisational skills on guitar led him to pick up the bass, and soon Rainey found himself working steadily as a studio bassist in New York City, recording or touring with many of the greatest acts of that time.

By the 1970s he had played with Jerome Richardson, Grady Tate, Mose Allison, Gato Barbieri, and Gene Ammons, as well as with Eddie Vinson at the 1971 Montreux Festival.[1]

As a member of The King Curtis All-Stars, he toured with the Beatles on their second run across the United States. By the beginning of the 1970s, Rainey had firmly established his place as one of New York City's first call session bass guitarists.

Moving to Los Angeles in 1972, his work with Quincy Jones continued as a member of Jones' big band, and Rainey continued to work as a studio musician on others albums like, Betty Davis' famously shelved session from 1976 or Tim Buckley's Greetings from L.A. About this time, he bumped into friend and Steely Dan producer Gary Katz, which led to performing on tracks for Pretzel Logic by Steely Dan. His relationship with Steely Dan continued through Katy Lied; The Royal Scam, Aja, where he performs on every track except "Deacon Blues" (Walter Becker played bass for that track); and Gaucho.

Rainey's style has always been to provide a rhythmic and melodic bottom that works with the drummer for the benefit of the song. His books on bass study refer to a "sensitivity to music" and a dedication to studying the fundamentals of music theory. While his "sideman" philosophy of bass has not brought him the level of recognition of star players such as Jaco Pastorius, Rainey is by far more recorded than his more famous contemporaries.[1]

This article uses material from the article Chuck Rainey from the free encyclopedia Wikipedia and it is licensed under the GNU Free Documentation License.

Aimee Lena Anderssen
Update Required To play the media you will need to either update your browser to a recent version or update your Flash plugin.