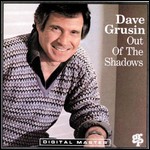 Robert David "Dave" Grusin (born June 26, 1934) is an American composer, arranger, producer, and pianist. He has composed many scores for feature films and television, and has won numerous awards for his soundtrack and record work, including an Academy Award and ten Grammy Awards. He has had a prolific recording career as an artist, arranger, producer and executive producer. He is the co-founder of GRP Records.

Born in Littleton, Colorado, he studied music at the University of Colorado at Boulder and was awarded his degree in 1956. He produced his first single, "Subways Are for Sleeping", in 1962 and his first film score for Divorce American Style (1967). Other scores followed, including Winning (1969), The Friends of Eddie Coyle (1973), The Midnight Man (1974), and Three Days of the Condor (1975).

In the late 1970s, he started GRP Records with his business partner, Larry Rosen, and began to create some of the first commercial digital recordings. He was the composer for The Graduate, On Golden Pond (1981), Tootsie (1982) and The Goonies (1985). In 1988, he won the Oscar for best original score for The Milagro Beanfield War, He also composed the musical scores for the 1984 TriStar Pictures and the 1993 Columbia Pictures Television logos.

From 2000 through 2011, Grusin concentrated on composing classical and jazz compositions, touring and recording with collaborators, including guitarist Lee Ritenour. Their album Harlequin won a Grammy Award in 1985. Their classical crossover albums, Two Worlds and Amparo, were nominated for Grammys.

Grusin was born in Littleton, Colorado, the son of Rosabelle (née De Poyster), a pianist, and Henri Grusin, a violinist who immigrated from Riga, Latvia.[1][2] An alumnus of the University of Colorado at Boulder, College of Music, he was awarded his bachelor's degree in 1956. Among his teachers there were Cecil Effinger and Wayne Scott, longtime pianist, arranger and professor of jazz.[3] Grusin has a filmography of about 100 titles. His many awards include an Oscar for best original score for The Milagro Beanfield War, as well as Oscar nominations for The Champ, The Fabulous Baker Boys, The Firm, Havana, Heaven Can Wait, and On Golden Pond. He also received a Best Original Song nomination for "It Might Be You" from the film Tootsie. Six of the fourteen cuts on the soundtrack from The Graduate are his. Other film scores he has composed include Where Were You When the Lights Went Out?, Three Days of the Condor, The Goonies, Tequila Sunrise, Hope Floats, Random Hearts, The Heart is a Lonely Hunter, Mulholland Falls and The Firm. In addition, he also composed the original opening fanfare for film studio TriStar Pictures.[4]

Grusin assisted in 1966 as musical director and arranger also for two years the Catarina Valente TV show and lived longer times in Amsterdam.

About 35 Grusin CD titles are currently available including soundtracks, originals, collections, and homages to jazz greats George Gershwin, Duke Ellington, and Henry Mancini. Recently he has turned his attention to his own compositions. As in much of his career, these defy easy classification. They can be heard on CD's in collaboration with major artists including Lee Ritenour, James Taylor, and Renée Fleming. In addition to Grusin's jazz, film work and other collaborations, he has also lent his talents as a producer / arranger / musician to numerous albums by artists including Paul Simon, Sérgio Mendes, Quincy Jones, Al Jarreau, Patti Austin, Dave Valentin and Sadao Watanabe. Billy Joel has also on occasion tapped Grusin for horn and string arrangements – Grusin arranged the horns on "Half a Mile Away" for Joel's 52nd Street album, and contributed horn and string arrangements to Joel's 1982 concept album, The Nylon Curtain.

Grusin is married to Nan Newton. He is the father of music editor Stuart Grusin, music editor and musician Scott Grusin, and aerospace engineer Michael Grusin. He is the stepfather of artist Annie Vought, and elder brother of keyboardist Don Grusin and sister Dee Grusin.

This article uses material from the article Dave Grusin from the free encyclopedia Wikipedia and it is licensed under the GNU Free Documentation License.

Closer Kandlbauer
Update Required To play the media you will need to either update your browser to a recent version or update your Flash plugin.