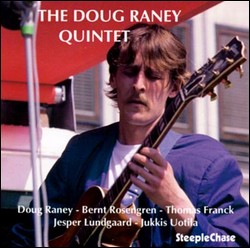 Raney was born in New York City. He started playing guitar when he was 14, beginning with rock and blues. He was given lessons by guitarist Barry Galbraith and became more interested in jazz. When he was 18, he played at club in New York with pianist Al Haig. In 1977, he accompanied his father, jazz guitarist Jimmy Raney, in a duo. They toured Europe, and then Doug Raney moved to Copenhagen, Denmark. When he was 21, he recorded his first album as a leader, Introducing Doug Raney (SteepleChase, 1977). He recorded several albums with father.[1][2][3]

This article uses material from the article Doug Raney from the free encyclopedia Wikipedia and it is licensed under the GNU Free Documentation License.

Little Talks Of Monsters and Men
Update Required To play the media you will need to either update your browser to a recent version or update your Flash plugin.