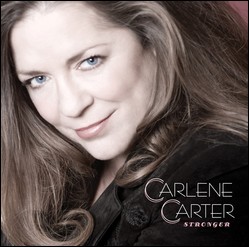 Carlene Carter (born Rebecca Carlene Smith; September 26, 1955) is an American country singer and songwriter. She is the daughter of June Carter and her first husband, Carl Smith.

Between 1978 and the present, Carter has recorded twelve albums, primarily on major labels. In the same timespan, she has released more than twenty singles, including three No. 3-peaking hits on the Billboard Hot Country Songs charts.

In 1987, Carlene Carter joined with the singing trio The Carter Sisters, consisting of her mother June Carter Cash and June's sisters Helen and Anita Carter in a revived version of The Carter Family, and were featured on a 1987 television episode of Austin City Limits along with Carter's stepfather Johnny Cash.[1]

Her solo recording career had begun in the late 1970s with her eponymous debut album. In 1979, during a concert at New York's Bottom Line, she introduced a song about mate-swapping called Swap-Meat Rag, from her album Two Sides to Every Woman, by stating, "If this song don't put the cunt back in country, I don't know what will." Johnny Cash and June Carter were in the audience, unknown to Carlene.[2] The comment was quoted widely in the press, and Carter spent much of the next decade trying to live it down.[3]

Carter's career really took off with the album I Fell in Love, in 1990. The album and title song topped the US country albums and singles charts, respectively. Following a stint in the UK and in the run-up to her divorce from the English singer-songwriter Nick Lowe, Carter had returned to America, where in 1988 she met musician Howie Epstein. Epstein helped Carter get her career back on track, producing I Fell in Love and co-authoring its title track with longtime collaborator, Milwaukee writer Perry M. Lamek. In 1991, the song "I Fell in Love" earned a Grammy nomination for Best Female Country Vocal Performance. The album, which featured straight-ahead, retro-sounding country (unlike her prior work, which had combined country, rock and roll and pop sounds) was among the first successes of the 1990s "neotraditionalist" movement in country.

Three years later, Epstein produced Carter's follow-up CD Little Love Letters, featuring the hit "Every Little Thing", which was one of the top-rated music videos of the year. Epstein and Carter were engaged in the mid to late 1990s, but never married. Epstein died in 2003 of a suspected drug overdose.[4]

Carter provided the voice of "Red" in the 1994 Williams pinball machine, Red & Ted's Road Show, designed by Pat Lawlor. A clip of Carter's hit, "Every Little Thing," is played after the player scores a jackpot. A picture of Carter appears in the game's backglass artwork.

Carter had a cameo appearance in the 1994 film Maverick. She played a waitress on the gambling casino ship run by Commodore Duvall (James Coburn).

In 1995 Carter's Little Acts of Treason was critically well received but failed to achieve the commercial success of Carter's two previous releases. In 1996, Carter released Hindsight 20/20, a greatest hits album but it too failed to achieve success.

She also found limited amounts of fame with the song "It Takes One to Know Me," which was released on the albums Johnny Cash: The Legend and Johnny Cash and June Carter Cash: Duets. Originally recorded in 1977 with a full string backing group, it was lost in a tape collection in Hendersonville and uncovered in 2003. It was then remastered by her brother John Carter Cash. In the remastered version John added his and his wife Laura's (her sister-in-law) backing vocals and a guest appearance from Carlene herselfmore than 25 years after she wrote and recorded the song.

On June 26, 2001, a New Mexico police officer pulled over Carter and Epstein. A search of the vehicle revealed that it was stolen and drugs were found.[5]

On August 8, 2009, Carlene Carter played a live acoustic set at Hecksher Park in Huntington, NY. During the performance, she stated that it was the first time in more than 30 years that she performed by herself. During her hour-long set, she played the title track from her latest release, "Stronger," and said it was written in memory of her younger sister, who had died six years earlier. The track was performed on the piano and brought Carter to tears. Her younger sister is also mentioned in her track "Wildwood Rose." She ended the set by playing "Will the Circle Be Unbroken?" with the opening act, "The Homegrown String Band", a family band from the area. She said it brought back memories of playing with her own family.

Carter was for many years linked romantically with the late bass player Howie Epstein, best known for his work with Tom Petty and the Heartbreakers.[7]

This article uses material from the article Carlene Carter from the free encyclopedia Wikipedia and it is licensed under the GNU Free Documentation License.

Shelby 68 Kylie Minogue
Update Required To play the media you will need to either update your browser to a recent version or update your Flash plugin.