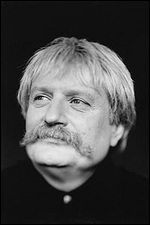 Jenkins was educated in music at Cardiff University and the Royal Academy of Music, where he is a fellow and an associate. He was a member of the jazz-rock band Soft Machine. Jenkins has also composed music for advertisement campaigns and has won the industry prize twice.

Karl Jenkins was born and raised in Penclawdd, Gower, Wales. His mother was Swedish and his father was Welsh. Jenkins received his initial musical instruction from his father who was the local schoolteacher, chapel organist and choirmaster. He attended Gowerton Grammar School.[1]

Jenkins began his musical career as an oboist in the National Youth Orchestra of Wales. He went on to study music at Cardiff University, and then commenced postgraduate studies in London at the Royal Academy of Music, where he also met his wife and musical collaborator, Carol Barratt. He studied with Alun Hoddinott.[2][3][4]

For the bulk of his early career Jenkins was known as a jazz and jazz-rock musician, playing baritone and soprano saxophones, keyboards and oboe, an unusual instrument in a jazz context. He joined jazz composer Graham Collier's group and later co-founded the jazz-rock group Nucleus, which won first prize at the Montreux Jazz Festival in 1970.

In 1972 he joined the Canterbury progressive rock band Soft Machine. The group played venues including The Proms, Carnegie Hall, and the Newport Jazz Festival. The album on which Jenkins first played with Soft Machine, Six, won the Melody Maker British Jazz Album of the Year award in 1973. Jenkins also won the miscellaneous musical instrument section (as he did the following year). Soft Machine was voted best small group in the Melody Maker jazz poll of 1974. The albums in which Jenkins performed and composed were Six, Seven (1973), Bundles (1975), Softs (1976) and Land of Cockayne (1981). Jenkins composed most of the tracks on Seven and nearly all of the tracks on the subsequent three albums.

After Mike Ratledge left the band in 1976, Soft Machine did not include any of its founding members, but kept recording on a project basis with line-ups revolving around Jenkins and drummer John Marshall. Although Melody Maker had positively reviewed the Soft Machine of 1973 and 1974, Hugh Hopper, involved with the group since replacing bassist Kevin Ayers in 1968, cited Jenkins's "third rate" musical involvement in his own decision to leave the band,[5] and the band of the late 1970s has been described by band member John Etheridge as wasting its potential.[6]

In November 1973, Jenkins and Ratledge participated in a live-in-the-studio performance of Mike Oldfield's Tubular Bells for the BBC.[7] It is available on Oldfield's Elements DVD.

Jenkins has created advertising music, twice winning the industry prize in that field. From the 1980s, he developed a relationship with Bartle Bogle Hegarty, starting with composing musics for their Levi's jeans "Russian" series. He composed a classical theme used by De Beers diamond merchants for their television advertising campaign focusing on jewellery worn by people otherwise seen only in silhouette. Jenkins later included this as the title track in a compilation called Diamond Music, and eventually created Palladio, using it as the theme of the first movement. Other arrangements have included advertisements for the Renault Clio.[2]

As a composer, his breakthrough came with the crossover project Adiemus. Jenkins has conducted the Adiemus project in Japan, Germany, Spain, Finland, the Netherlands, and Belgium, as well as London's Royal Albert Hall and Battersea Power Station. The Adiemus: Songs of Sanctuary (1995) album topped the classical album charts. It spawned a series of successors, each revolving around a central theme.

Jenkins was the first international composer and conductor to conduct the University of Johannesburg Kingsway Choir led by Renette Bouwer, during his visit to South Africa as the choir performed his The Armed Man: A mass for peace together with a 70-piece orchestra.

Jenkins' choral work The Peacemakers, features texts from Gandhi, Martin Luther King, the Dalai Lama, Nelson Mandela, Anne Frank and Mother Teresa, as well as words from the Bible and the Qur'an with some new text specially written by Terry Waite. On the 2012 record the London Symphony Orchestra is joined by different vocal forces including Rundfunkchor Berlin, the City of Birmingham Youth Chorus, and the 1000-strong "The Really Big Chorus" made up of members of UK choirs from across the country brought together in one day, in one studio, to contribute to two movements on the album. Guest artists include violinist Chloë Hanslip, soprano Lucy Crowe, Davy Spillane on Uilleann pipes, Indian bansuri player Ashwin Srinivasan and jazz musicians Nigel Hitchcock and Laurence Cottle. The album was released on 26 March 2012. The world premiere of this seventeen-movement work took place, however, in New York City's Carnegie Hall on 16 January 2012. Jenkins conducted from the podium and John H. Briggs, Sr. conducted the Children's Chorus from a seated position. Briggs was the Choral Arts Conductor of one of the participating schools and its two choruses: Il Bel Canto and Die Meistersingers of Gwynn Park Middle School, MD, USA[8] Additional concerts in the UK and US took place later in the year.[9]

Jenkins composed the music for the 2012 BBC Wales series The Story of Wales presented by Huw Edwards.[10]

A work entitled The Healer – A Cantata For St Luke was premiered on 16 October 2014 (7:30 pm) in St Luke's Church, Grayshott, Hampshire, and was recorded and broadcast on Classic FM.[11] The Healer received its US premiere at Carnegie Hall, New York on 19 January 2015. In September 2015, the recording of the premiere of The Healer was released on CD by Warner Classics as part of the 8 disc boxed set Voices.

A compilation CD, Still With The Music, was also released in September 2015, coinciding with the publication of his autobiography of the same name.

On 8 October 2016 Jenkins' choral work Cantata Memoria: For the children, a response to the 1966 Aberfan disaster with a libretto by Mererid Hopwood and commissioned by S4C, premiered at the Wales Millennium Centre. The concert was broadcast the following evening on S4C and was released as an album by Deutsche Grammophon.[12][13]

Jenkins holds a Doctorate in Music from the University of Wales. He has been made both a fellow and an associate of the Royal Academy of Music, and a room has been named in his honour. He also has had fellowships at Cardiff University (2005),[14] the Royal Welsh College of Music & Drama, Trinity College Carmarthen, and Swansea Metropolitan University.

Jenkins is joint president of the British Double Reed Society[19] and Patron of the International Schools Choral Music Society (ISCMS).

In 2016 Jenkins received the BASCA Gold Badge Award for his unique contribution to music.[20]

This article uses material from the article Karl Jenkins from the free encyclopedia Wikipedia and it is licensed under the GNU Free Documentation License.