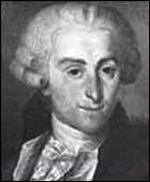 born in 1700 in Milano, Lombardia, Italy

Giovanni Battista Sammartini (c. 1700  15 January 1775) was an Italian composer, oboist, organist, choirmaster and teacher. He counted Gluck among his students, and was highly regarded by younger composers including Johann Christian Bach. It has also been noted that many stylizations in Joseph Haydn's compositions are similar to those of Sammartini, although Haydn denied any such influence.[2] Sammartini is especially associated with the formation of the concert symphony through both the shift from a brief opera-overture style and the introduction of a new seriousness and use of thematic development that prefigure Haydn and Mozart. Some of his works are described as galant, a style associated with Enlightenment ideals, while "the prevailing impression left by Sammartini's work... [is that] he contributed greatly to the development of a Classical style that achieved its moment of greatest clarity precisely when his long, active life was approaching its end".[3]

He is often confused with his brother, Giuseppe, a composer with a similarly prolific output (and the same first initial).

Giovanni Battista Sammartini was born to French emigrant and oboist Alexis Saint-Martin and Girolama de Federici in Milan, in what was Austria during most of his lifetime and Italy today. He was the seventh of eight children. He received musical instruction from his father and wrote his first work in 1725, which was a set of vocal works (now lost). Not long after, he acquired the positions of maestro di cappella at Sant'Ambrogio and to the Congregazione del Santissimo Entierro in 1728. He held the position at Sant'Ambrogio until his death.[4]

Sammartini quickly became famous as a church composer and obtained fame outside of Italy by the 1730s. Over the course of the years, he joined many churches for work (8 or more by his death[5]) and wrote music to be performed at state occasions and in houses of nobility. Although he never strayed far from Milan, he came into contact with many notable composers including J.C. Bach, Mozart, Boccherini, and Gluck, the latter of whom became his student from the years 1737 to 1741.

Sammartini's death in 1775 was unexpected. Although he was highly regarded in his time, his music was quickly forgotten, and was not rediscovered until 1913 by researchers Fausto Torrefranca, Georges de Saint-Foix and Gaetano Cesari. However, most of his surviving works have been recovered from published editions from outside his hometown of Milan.

Sammartini is mostly praised for his innovations in the development of the symphony, perhaps more so than the schools of thought in Mannheim and Vienna.[6] His approach to symphonic composition was unique in that it drew influence from the trio sonata and concerto forms, in contrast to other composers during the time that modeled symphonies after the Italian overture. His symphonies were driven by rhythm and a clearer form, especially early sonata and rounded binary forms. His works never ceased to be inventive, and sometimes anticipated the direction of classical music such as the Sturm und Drang style. [7]

Sammartini was a prolific composer, and his compositions include 4 operas, about 70 symphonies, ten concertos and some of the earliest chamber music known in the history of western music. As of 2004, approximately 450 known works by Sammartini have been recovered, although a fair amount of his music has been lost, especially sacred and dramatic works.[6] Some of it may have also been lost due to publication under other names, especially that of his brother, Giuseppe.[8] His earliest music was for liturgical use.

Sammartini's works are referred to, in publications or recordings, either by the opus number they received in his lifetime, or by the J-C numbers they receive in the Jenkins-Churgin catalog referred to below. Newell Jenkins edited some of Sammartini's works, including a Magnificat, for the first time (he was also an editor of works by Vivaldi, Paisiello and Boccherini, among others).

Sammartini's music is generally divided into three stylistic periods: the early period (1724-1739), which reflects a mixture of Baroque and Preclassical forms, the middle period (1740-1758), which suggests Preclassical form, and the late period (1759-1774), that displays Classical influences.[4] Sammartini's middle period is regarded as his most significant and pioneering, during which his compositions in the galant style of music foreshadow the Classical era to come.

This article uses material from the article Giovanni Battista Sammartini from the free encyclopedia Wikipedia and it is licensed under the GNU Free Documentation License.

DJ's Last Stand Andy Trinkler
Update Required To play the media you will need to either update your browser to a recent version or update your Flash plugin.