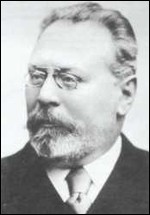 Noskowski was born in Warsaw and was originally trained at the Warsaw Conservatory studying violin and composition with Stanisław Moniuszko, graduated with distinction in 1867. A scholarship enabled him to travel to Berlin where between 1872 and 1875, he studied with Friedrich Kiel, one of Europe’s leading teachers of composition. After holding several positions - kapellmeister and conductor of the Bodan Choral Society in Konstanz, Noskowski returned to Warsaw in 1880 where he remained for the rest of his life, professor of composition at the Warsaw Conservatory and conductor of Warsaw Society of Friends and the Warsaw Philharmonic (1905-1908).

He worked not only as a composer, but also became a famous teacher, a prominent conductor and a journalist. He was one of the leading figures in Polish music during the late 19th century and the first decade of the 20th. He taught virtually all of the important Polish composers of the next generation, including Karol Szymanowski[1] and Grzegorz Fitelberg. See: List of music students by teacher: N to Q#Zygmunt Noskowski. He served as head of the Warsaw Music Society from 1880 to 1902 and was considered Poland’s leading composer during the last decade of his life. He died in Warsaw.

While Noskowski is best known for his orchestral compositions, he composed opera, chamber music, instrumental sonatas and vocal works of importance. Discussing Nowkowski's chamber music, the famous critic and scholar Wilhelm Altmann wrote that it was "very effective and deserving of public attention and performance." Judging from the piano quartet written in 1879, one can hear that Noskowski had assimilated the recent musical developments taking place in Central Europe but the music, other than structurally, shows little or no influence of any of the major composers of the time, such as Brahms, Liszt, or Wagner, who were then dominating the scene.

Some of the information on this page appears on the website of Edition Silvertrust but permission has been granted to copy, distribute and/or modify this document under the terms of the GNU Free Documentation License.

This article uses material from the article Zygmunt Noskowski from the free encyclopedia Wikipedia and it is licensed under the GNU Free Documentation License.

Per averti Adriano Celentano
Update Required To play the media you will need to either update your browser to a recent version or update your Flash plugin.