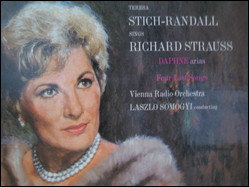 Teresa Stich-Randall was born in New Hartford, Connecticut in 1927 and studied at Hartford School of Music in Hartford under Ivan Velikanoff.[2]

Her operatic debut was in the role of Henrietta M.[3] in Virgil Thomson's The Mother of Us All in 1947 and she sang the title role in Otto Luening's Evangeline in 1948.[3]

She was discovered in the late 1940s by Arturo Toscanini, who engaged her for a series of performances with his NBC Symphony Orchestra in New York.[3] Toscanini described her at the time as "the find of the century".[2] She appeared as Nanetta in his two-part NBC radio broadcast of Verdi's Falstaff, in 1950, one of Toscanini's most acclaimed performances. It was also released on LP, 45-RPM, and CD.

Stich-Randall travelled on a Fulbright Scholarship to Europe, where she made her name as a singer.[3] She made her European debut in Florence and won a competition in Lausanne the following year. This led to appearances with the Basel Opera in Switzerland.

Stich-Randall was a regular performer with the Vienna State Opera and at the Salzburg Festival.[2] From 1955, she was a regular at summer events at Aix-en-Provence in France, where her portrayal of Donna Anna in Don Giovanni was highly esteemed.[4]

In 1962, the Austrian Government awarded her the title of Kammersängerin, given to esteemed vocal artists.[3] Stich-Randall made her debut at the Chicago Lyric Opera as Gilda in Rigoletto in 1955. She first sang at the Metropolitan Opera in New York City in Così fan tutte in 1961 and remained on their roster of singers until 1966.[1] Stich-Randall made her Boston debut in 1963 for the Peabody Mason Concert series.[5]

Stich-Randall appeared on a number of notable recordings including Falstaff, Der Rosenkavalier and L'Orfeo.[1]

This article uses material from the article Teresa Stich-Randall from the free encyclopedia Wikipedia and it is licensed under the GNU Free Documentation License.

Love Lift Me Amanda Marshall
Update Required To play the media you will need to either update your browser to a recent version or update your Flash plugin.