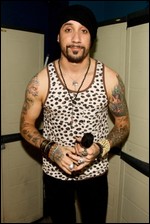 For the cattleman and politician from Alberta, Canada, see Archibald J. McLean.

Alexander James "AJ" McLean (born January 9, 1978)[1] is an American singer, songwriter, actor, dancer, and model. He is a member of the vocal group the Backstreet Boys.

Alexander James McLean was born on January 9, 1978, in West Palm Beach, Florida, to Denise (née Fernandez, now Solis) and Bob McLean. He is of Puerto Rican and German ancestry on his mother's side and Scots-Irish and English on his father's side. He is an only child because his twin sisters died during childbirth. He was raised by his mother and grandparents (Ursula and Adolph) as his parents divorced when he was four years old.[1]

As a kid, McLean had a speech impediment, which made him have a lisp and to stutter.

He discovered his love for performing and started to pursue a career in acting, dancing and singing. When he was four, McLean began to focus on his love for dance, so his mother signed him up for dance lessons every day for two hours. He took ballet for four years, jazz, tap, hip hop, rhythm tap, rhythm hip-hop, contemporary, ballroom, salsa, merengue and gymnastics. His mother then got him into modelling when he was around five for a few years, doing J.C. Penny's catalogues and runways. At age six, McLean was part of a school play, Snow White and the Seven Dwarfs, in which he played Dopey, at Unity of Delray Beach church and school. He also appeared in more traditional musicals such as The Nutcracker, The King and I and Fiddler on the Roof before the age of 11. By the time he was 12, he had performed in many classic school plays.

In addition to singing and acting, he was a serious dance student learning everything from jazz to ballet to hip hop.[2]

In 1990, McLean, his mother and grandparents moved to Kissimmee, Florida, to pursue his acting and singing career. He attended a private acting school, the Florida Academy of Dramatic Arts, for four years, acted in the drama club and in small plays, and modeled periodically.

In 1991 McLean landed a role on the Nickelodeon comedy series Hi Honey, I'm Home! as a kid named Skunk. However, he was cut from the show due to being too tall. His only known appearance on the show is in the pilot episode, which Nickelodeon aired in 1999 as part of its birthday celebration.

When he was 13 years old, McLean tried out for Star Search, but never received a call back from the show. He later saw an ad in the newspaper for a Latin festival and since his grandfather has Latin roots, he decided to audition. He later learned that he had won first place and a $1,000 prize. The producer of the festival hired him to perform a 45-minute one-man show. He did a puppet show which also showcased his singing and dancing. At the Latin festival, he met a young Howie Dorough (Tony Donetti at the time) through a mutual vocal coach.[2]

In junior high, McLean won a part in Nickelodeon's series Welcome Freshmen, which began his ongoing work relationship with Nickelodeon and the Disney Channel. He also appeared on the Nickelodeon show GUTS and a Muppets commercial. It was during one of his auditions for the former that he met Howie D. and Nick Carter, lacing together the roots of the group that was to become Backstreet Boys.

In March 1992, there was an ad in the newspaper seeking for young men between the ages of 16-19 for an audition of a new music group. Despite being 14 years old, he auditioned for the group. By April 1992, McLean was officially the first member of the group that would become the Backstreet Boys. After three years at Osceola High School, he finished his final year of high school with a tutor on the road after joining the Backstreet Boys.[2]

McLean, Nick Carter, Howie Dorough, Kevin Richardson, and Brian Littrell formed the pop group Backstreet Boys in 1993. The group became very successful in the late 90s-early 2000s. In 2013 they celebrated their 20th anniversary and released a new album called In a World Like This.

McLean created a character, whom he named "Johnny No Name", to use as his alter ego. He uses this as his name when not performing with other members of the Backstreet Boys.[4] The character has similarities to McLean; for instance, both had single mothers, and lived with their grandparents from a young age. There are also differences – Johnny has been to prison[5] whereas McLean has not. McLean has occasionally performed in rock/metal clubs around New York as Johnny No Name. He established a foundation called the JNN Foundation to raise funds for diabetes research and other causes like keeping music programs in schools. McLean also did a nine-city tour to support VH1 Save the Music as Johnny No Name.

Originally McLean's alter ego was named Johnny Suede. This shared a name with a character played by Brad Pitt, and when the studio threatened to sue McLean, he changed the name to Johnny No Name.[6][7]

In March 2008, McLean performed his first two solo shows (as himself) at the Anaheim House of Blues and The Roxy in Los Angeles. The show consisted of his solo material and a solo version of the Backstreet Boys hit, "Incomplete". The solo tour continued through Europe in May and June, in parallel to Backstreet Boys tour. While creating his solo project, McLean worked with the OneRepublic vocalist Ryan Tedder, producers Dan Muckala and Kristian Lundin, plus the former NSYNC member, JC Chasez. On January 20, 2010, Have It All, was released in Japan. He confirmed on the Backstreet Boys cruise in December 2010 that the US version would be released on February 8, 2011.[8]

McLean was set to release his second solo album titled Naked on September 9, 2016. The lead single, "Live Together" was released on September 4, 2015, on iTunes.[10]

On July 22, 2015, McLean launched Skulleeroz Vapor, a line of liquids for use with electronic cigarettes.[11]

In 1992, McLean was a contestant in the real-life live-action game show, Nickelodeon Guts. In April 2002, McLean made a guest appearance the episode titled "Duped" in season 2 of Static Shock, a cartoon which ran from 2000–2004.[12]

McLean also appeared and performed with the Backstreet Boys on Arthur, Sesame Street, Sabrina the Teenage Witch, and Saturday Night Live. In 2013, McLean made his motion picture debut by appearing in the comedy, This Is the End, along with the rest of the Backstreet Boys.

McLean suffered from drug and alcohol addiction. He went to rehab in 2001 (and again in 2002) following an intervention by bandmate Kevin Richardson. During an interview with New Zealand radio station ZM, McLean described addiction as the hardest thing he has ever had to go through, stating it is something he battles with every day.[13] He checked into rehab for the third time on January 10, 2011, citing "personal reasons".[14] In preparation for the NKOTB and Backstreet Boys tour, McLean said, "I want to be healthy and perform and sing for people at my very best and happiest." His time in rehab did not affect the tour.[15]

McLean married Rochelle Deanna Karidis, a makeup/hair stylist, whom he credits for helping him overcome his addiction, on December 17, 2011, in Beverly Hills, California.[16][17] The rest of the Backstreet Boys, Nick Carter, Howie Dorough, Brian Littrell, and Kevin Richardson were in attendance.[18] On November 27, 2012, the couple welcomed their first child,[19] a daughter named Ava Jaymes.[20][21] On September 5, 2016, McLean announced on Instagram that his wife was pregnant with their second child, another girl.[22][23] On March 19, 2017, the couple's second child, whom they named Lyric Dean, was born in Los Angeles.[24]

This article uses material from the article A. J. McLean from the free encyclopedia Wikipedia and it is licensed under the GNU Free Documentation License.

Tragedy Bee Gees
Update Required To play the media you will need to either update your browser to a recent version or update your Flash plugin.