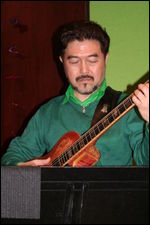 Kazumi learned to play guitar from Sadanori Nakamure, one of Japan's grandmaster guitarists. Kazumi released his first recording in 1971, and quickly became a promising guitarist in his own right. In 1979, he formed an all-star band with some of Japan's leading studio musicians, and recorded the album Kylyn, which is considered a masterpiece in fusion music.[3]

During the eighties Watanabe released a considerable number of jazz-rock albums. To Chi Ka (1980), with its funk influences and bright sound, is probably the most famous early title. Some latter albums, such as Mobo Club (1983) and Mobo Splash (1985) display more experimental tendencies. But the most famous of all is Spice of Life (1987) which is written in a strongly melodic style. A DVD has been issued from the tour in which the music was played with drummer Bill Bruford and bassist Jeff Berlin (who also play on the studio record). In the 1990s Kazumi assembled an all-Japanese line-up called Resonance Vox (Vagabonde Suzuki on bass, Rikiya Higashihara on drums, Tomohiro Yahiro on percussion). This band has released several adventurous fusion albums.

Watanabe has worked with numerous musicians such as Steve Gadd, Tony Levin, Jeff Berlin, Bill Bruford, Sly and Robbie, Wayne Shorter, Patrick Moraz, Marcus Miller, Richard Bona, and Peter Erskine. Since 1996, he has been a visiting professor of music at Senzoku Gakuen College. He endorses Steinberger and Paul Reed Smith guitars, and has been chosen Best Jazzman 24 years in a row by Swing Journal magazine's annual poll.

This article uses material from the article Kazumi Watanabe from the free encyclopedia Wikipedia and it is licensed under the GNU Free Documentation License.

Soulful Man Floy
Update Required To play the media you will need to either update your browser to a recent version or update your Flash plugin.