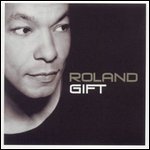 Roland Lee Gift (born 28 May 1961)[1] is a British singer, songwriter and actor. He was the lead singer of the band Fine Young Cannibals, who rose to fame in the mid 1980s.

Gift was born in Sparkhill in Birmingham,[2] England, to a white mother and a black father,[3] and lived in the city until the age of 11.[4] He then moved to Hull, where his mother, Pauline, ran several second-hand clothes shops. He was educated at Kelvin Hall School in Hull.

Gift has three sisters, Helga, Ragna and Jay, and one brother, Paul.

One of his children, son Louis, performs in the experimental acrobatic circus company Barely Methodical Troupe.[5]

His first recording, on which he played the saxophone,[3] was with Hull ska band Akrylykz; the second release on York's Red Rhino Records.[6] Although this record was unsuccessful, it did bring him to the attention of Andy Cox and David Steele of the Beat. Akrylykz toured with the Beat,[7] which led to them, in around 1985, asking him to be the lead singer of their new band Fine Young Cannibals after their old band, the Beat, had broken up. He also was a guest artist on the Ska City Rockers' "Time Is Tight" single.

In 1990, he was named by People magazine as one of the "50 Most Beautiful People" in the world.

Gift has performed as a solo artist again, appearing at the Rewind Festival in Henley.[8] On 13 February 2012, Gift appeared on BBC Radio Solent promoting the gigs and announced a potential new album in 2012. This will be a soundtrack to a film Gift is involved with. "The Prisoner" was played on the show and Roland said this would probably be included in the soundtrack.

In 1987, Gift had his first screen role in the film Sammy and Rosie Get Laid, and also appeared in Out of Order the same year. In 1990 he did his first stage work, playing Romeo in the Hull Truck Theatre's production of Shakespeare's Romeo and Juliet, a production which had a brief run in the United States at the Staller Center for the Arts.[11] He also appeared as a lounge singer (singing songs that were included in the Fine Young Cannibals album The Raw and the Cooked) in the 1987 film Tin Men, directed by Barry Levinson.[12]

In 1989, he appeared in Scandal as Johnny Edgecombe, Christine Keeler's boyfriend.

In December 1992, he began the first of five appearances as the evil Immortal Xavier St. Cloud in the television series Highlander: The Series, and appeared in an episode of the Yorkshire Television series Heartbeat. He also had a small role as the jazz saxophonist Eddie Mullen in the mini-series Painted Lady (1997), starring Helen Mirren, and appeared in the movie The Island of the Mapmaker's Wife (2001).

This article uses material from the article Roland Gift from the free encyclopedia Wikipedia and it is licensed under the GNU Free Documentation License.

About You PEaCH
Update Required To play the media you will need to either update your browser to a recent version or update your Flash plugin.