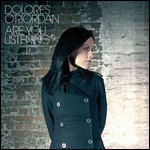 Dolores Mary Eileen O'Riordan (/oʊˈrɪərdən/; born 6 September 1971) is an Irish musician and singer-songwriter. She led the rock band The Cranberries to worldwide success for thirteen years before the band took a break starting in 2003, reuniting in 2009.[1]

Her first solo album Are You Listening? was released in May 2007 and was followed up by No Baggage in 2009. O'Riordan is notable for her lilting mezzo-soprano voice,[2] for yodeling and for her strong Limerick accent.[3] She appeared as a judge on RTÉ's The Voice of Ireland during the 2013/14 season. In April 2014 O'Riordan joined Jetlag (now called D.A.R.K.)[4] and began recording new material. In May 2017 Dolores declared that she has been diagnosed with bipolar disorder.[5]

Dolores Mary Eileen O'Riordan was born and brought up in the Ballybricken area of County Limerick, Ireland. She is the daughter of Terence and Eileen O'Riordan and is the youngest of seven children. She attended Laurel Hill Coláiste FCJ school in Limerick.[6]

In 1990 O'Riordan auditioned and won the role of lead singer for a band called The Cranberry Saw Us (later changed to The Cranberries).

Throughout the '90s, O'Riordan was recognised for her changing hairstyles, from shoulder-length to very short crop in myriad colours and shades.[7] She sometimes performs barefoot on stage.[7]

On 25 August 2009, while promoting her solo album No Baggage in New York City on 101.9 RXP radio, O'Riordan announced the reunion of The Cranberries for a world tour. The tour began in North America in mid November, followed by South America in mid January 2010 and Europe in March 2010.[8] Also touring with the original members of The Cranberries was musician Denny DeMarchi, who played the keyboard for O'Riordan's solo albums.[9] The band played songs from O'Riordan's solo albums, many of The Cranberries' classics, as well as new songs the band had been working on. On 9 June 2010 The Cranberries performed at the Special Olympics opening ceremony at Thomond Park in Limerick. This was the first time the band had performed in their native city in over fifteen years.

On 26 May 2016, the band announced that they would start a tour in Europe. The first show was held on 3 June.

It was rumoured that in 2003 O'Riordan was to feature on the soundtrack to Spider-Man 2 with the song "Black Widow", which is featured on her first solo album Are You Listening?. However, she dismissed this as an unfounded Internet rumour during an interview in 2007.[10] In 2004, O'Riordan appeared with the Italian artist Zucchero on the album Zu & Co., with the song "Pure Love". The album also featured other artists such as Sting, Sheryl Crow, Luciano Pavarotti, Miles Davis, John Lee Hooker, Macy Gray and Eric Clapton. The same year she worked with composer Angelo Badalamenti on the Evilenko soundtrack, providing vocals on several tracks, including "Angels Go to Heaven", the movie theme.

In 2005, she appeared on the Jam & Spoon's album Tripomatic Fairytales 3003 as a guest vocalist on the track "Mirror Lover". O'Riordan also made a cameo appearance in the Adam Sandler comedy Click, released on 23 June 2006, as a wedding singer performing an alternate version of The Cranberries' song "Linger", set to strings.

The first single, "Ordinary Day", was produced by BRIT Awards winner, Youth, whose previous credits include The Verve, Embrace, Primal Scream, U2 and Paul McCartney.

O'Riordan made an appearance live on The Late Late Show on 20 April 2007.

Are You Listening? was released on 4 May 2007 in the Republic of Ireland. It was subsequently released in Europe on 7 May 2007, and in North America on 15 May 2007, with "Ordinary Day" as its first single, released in late April. The video for "Ordinary Day" was shot in Prague. In August "When We Were Young" was released as the second single lifted from the album.[11][12]

On 19 November 2007, she cancelled the remainder of her European Tour (Lille, Paris, Luxembourg, Warsaw and Prague) due to illness. O'Riordan went on to perform a few small American club gigs in December, including Des Moines, Nashville, and a well-received free show in Charlottesville, Virginia.[13] On the last day of 2008, it was announced on her official website that her second album, No Baggage, featuring eleven tracks, would be released on 24 August 2009.

In 2008 Dolores O'Riordan won an EBBA Award. Every year the European Border Breakers Awards recognise the success of ten emerging artists or groups who reached audiences outside their own countries with their first internationally released album in the past year.[14]

O'Riordan began recording new material with Jetlag in April 2014.[4] At the origin a collaboration between Andy Rourke of The Smiths and Ole Koretsky, it then changed name to become D.A.R.K. Their first album, Science Agrees, was released on 9 September 2016.

In 1998, she bought a 61-hectare (150-acre) stud farm, called Riversfield Stud, located in Kilmallock, County Limerick. She lived there for six years before selling it in 2004.[16]

O'Riordan lived in Howth, County Dublin with her husband and their three children. The family once divided their time between homes in Dublin and a log cabin located in Buckhorn, Ontario, Canada that was bought in 1994.[18][19] In 2009, her family moved full-time to their home in Buckhorn.[20] In August 2013, O'Riordan returned to live in Ireland.

Dolores was raised as a Roman Catholic.[21] Her mother was a devout Catholic who chose her name in reference to the Lady of the Seven Dolours. She admires the late Pope John Paul II. After meeting him inside Vatican City, O'Riordan remarked: "[He] was lovely, very saintly. I was mad about him. I thought he really cared for the poor and he loved to meet the people. I saw him when he came to Limerick, when I was a kid. So it was pretty mindblowing to take my mum out to meet him."[22] She was invited by Pope Benedict XVI at the Vatican's annual Christmas concerts, and performed there several times, in 2001, 2002 and 2005.

On 10 November 2014, O'Riordan was arrested and charged in connection with an assault on an Aer Lingus flight from New York to Shannon. An air hostess and a policeman were assaulted and O'Riordan was held in custody following a visit to hospital herself.[23][24]

This article uses material from the article Dolores O'Riordan from the free encyclopedia Wikipedia and it is licensed under the GNU Free Documentation License.

Let Me Reintroduce Myself Gwen Stefani
Update Required To play the media you will need to either update your browser to a recent version or update your Flash plugin.