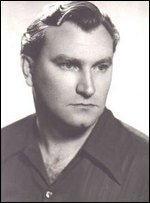 Nicola Rossi Lemeni, (November 6, 1920 – March 12, 1991), was a basso opera singer of mixed Italian-Russian parentage. Rossi Lemeni was born in Istanbul, Turkey, the son of an Italian colonel and a Russian mother. In his prime he was one of the most respected bassos in Italy. The composer Ildebrando Pizzetti wrote the opera Assassinio nella cattedrale (1958) specifically for Rossi-Lemeni. He was also a prize-winning poet and a painter.

The basso made his debut as Varlaam in Boris Godunov, at Venice, in 1946. He sang at the Teatro alla Scala from 1947 to 1960, the Teatro Colón (1949) and Covent Garden (1952). He appeared at the Metropolitan Opera, opening the 1953-54 season, in Faust (with Jussi Björling, Victoria de los Ángeles and Robert Merrill, conducted by Pierre Monteux and directed by Peter Brook in his Met debut), followed by the title roles of Don Giovanni and Boris Godunov.

Rossi Lemeni was married to Romanian soprano Virginia Zeani. Among his recordings are Don Carlos (with Mirto Picchi, 1951), Il barbiere di Siviglia (with de los Ángeles, 1952), andopposite Maria CallasI puritani (1953), Norma (1954), Il Turco in Italia (1954) and La forza del destino (1954) He was then featured in two recordings of La serva padrona, the first (1955) conducted by Carlo Maria Giulini, the second (1959) alongside Zeani. In 1952, he recorded excerpts from Boris Godunov with Leopold Stokowski and the San Francisco Symphony Orchestra for RCA Victor, which have been reissued on CD.

Rossi Lemeni was a pontifical knight, in the Order of St. Sylvester.

This article uses material from the article Nicola Rossi-Lemeni from the free encyclopedia Wikipedia and it is licensed under the GNU Free Documentation License.

Romeo Under Your Window Gwelly Music
Update Required To play the media you will need to either update your browser to a recent version or update your Flash plugin.