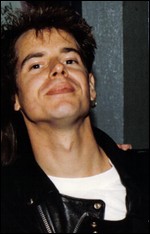 Paul Newell Hester (8 January 1959 – 26 March 2005) was an Australian musician and television personality. He was the drummer for the bands Split Enz and Crowded House.

Hester was the older of two children (his younger sister is Carolyn) from Melbourne, Australia born to a bushman father and jazz drummer mother.[1] At an early age he was encouraged by his mother to play drums. His extrovert personality did not impress his teachers, and he left school early and attempted various jobs before starting a musical career.[1] He spent most of his teen years living in the Dandenong Ranges, the family home being on the edge of Sherbrooke Forest at the Sherbrooke/Kallista boundary. Some of the Melbourne bands he played in from 1976 to 1978 included Thunder and Edges. In 1979 he co-founded a Melbourne-based band called Cheks[2] (renamed Deckchairs Overboard when they moved to Sydney in 1982).

At the departure of drummer Mal Green from Split Enz in 1981, their percussionist Noel Crombie took up the role of drummer. After the release of the Enz album Time and Tide in 1982, the band took a break to focus on other projects. According to the radio documentary Enzology, when they reformed in mid-1983, both Finn brothers returned somewhat distracted. Tim Finn had just released the very successful solo album Escapade, while younger brother Neil Finn had a child on the way.

The reunion resulted in Conflicting Emotions (November 1983), an album which marked the beginning of the end for the band. Before the tour to support the album it was decided that Crombie would return to percussion (something he says he enjoyed more than drumming), and the band would find a new drummer. Hester was auditioned on the advice of Rob Hirst of Midnight Oil and got the job. In June 1984, founder Tim Finn left Split Enz, and they released See Ya 'Round in November which included "This is Massive" which was written by Hester. When Split Enz disbanded in December, Hester and Neil Finn decided to start a new group.

Initially, the new band formed by Hester and Neil Finn was named "The Mullanes" and then underwent a few name changes. They recruited Nick Seymour to play bass guitar and Craig Hooper on guitar,[5] Hooper left as they secured a recording contract with Capitol Records in the US. However, Capitol disliked the name and the band changed to Crowded House to record their debut eponymous album, Crowded House in 1986.[5] Other records by Crowded House with Hester are: Temple of Low Men (1988), Woodface (1991), Together Alone (1993), and the Best-of collection Recurring Dream (1996).

By 1993 Hester was frustrated by the demands of his career and suffered a phobia about leaving to go on tour. On his return to Australia that year he started to see a psychiatrist.[6] He remained with Crowded House until 1994,[5] when the pressure of touring and the birth of his first daughter made him want to stay home, rather than remain on the road. Hester left mid-way through a 1994 tour of America, forcing the band to recruit British drummer Peter Jones for the rest of the tour. Hester performed with Crowded House at the band's farewell concert on the steps of the Sydney Opera House in 1996.

After leaving Crowded House, Hester appeared on many TV and radio shows in Australia and opened a cafe/restaurant named Beach House Cafe with fellow Melbourne musician Joe Camilleri in Elwood Beach in Melbourne. From 1995 until 1998, Hester appeared regularly on the popular Australian radio show Martin/Molloy. He played drums as a session musician for producer Richard Pleasance. One of his final recordings was Sophie Koh's debut album All the Pretty Boys.

Hester also had a recurring role as "Paul the Cook" on the popular Australian children's television show, The Wiggles, including his appearance in the Wiggles' video on the Disney Channel for "Fruit Salad (Yummy Yummy)".[7] Another of Hester's major contributions was his consistent efforts on behalf of Indigenous Australian culture. He also worked to publicize the local Melbourne musical scene.

In 1998, Hester hosted his own 10-part TV series Hessie's Shed on Australian Broadcasting Corporation (ABC).[8] This show gave Hester the room to explore his humorous presenter skills, showcase some friends, reunite with friends from Crowded House, and play with the house band and his own band, Largest Living Things, with Hester now performing from behind the drums instead of guitar.

Hester went on to host the intimate concerts The MAX Sessions. Broadcast on MAX, these intimate concerts, which were mainly recorded at the Sydney Opera House, featured a variety of local and international acts. A highlight of the show's concerts saw Hester reunite with former bandmates Neil Finn and Tim Finn for a few songs, backing them on drums, while they were promoting their album Everyone Is Here.

Hester was in a relationship with Deborah Conway from Do-Re-Mi in the early 1980s.[3] He later formed a relationship with photographer Mardi Sommerfeld and they had two daughters Olive and Sunday. They lived in the suburb of Elwood in Melbourne, Victoria.[9]

Hester is quoted as having claimed that he had always lived "on pages 57 and 58 of the Melway", being the pages of the Melbourne street directory covering the St Kilda district.

On 26 March 2005, aged 46, Hester committed suicide by hanging himself in Elsternwick Park near his home.[3] Four years earlier he had split from Mardi Sommerfeld. His two daughters, Olive and Sunday, were aged 8 and 10 at the time of his death.[10] It was known to family and close friends that he had been suffering from depression for a number of years, and was prone to extreme mood swings.[7]

Hester was buried at Blackwood in the Central Highlands region of Victoria. His life was commemorated at the 2005 Aria Awards, with Neil Finn singing the staple Crowded House anthem solo "Better Be Home Soon" along[11] with a mini-biography and footage from his life and achievements.

In October 2005, in memory of Hester and to acknowledge his long links with the area, the local Port Phillip Council agreed to name a path alongside the Elwood Canal, the Paul Hester Walk, after him. More recently, Hester Street in Officer was named after him.

Hester's girlfriend at the time of his death was New Zealand based singer Kashan Vincent.[12] In July 2006, Vincent sued his estate, claiming a third of his net worth.[13] Vincent claimed the pair had a relationship for 32 months and, while not cohabiting, were engaged, but had called off their wedding. By May 2007, the lawsuit was resolved out of court, with Vincent receiving a payout, and Hester's two daughters named as the sole beneficiaries of their father's estate.[14]

This article uses material from the article Paul Hester from the free encyclopedia Wikipedia and it is licensed under the GNU Free Documentation License.

I'm Outta Love Anastacia
Update Required To play the media you will need to either update your browser to a recent version or update your Flash plugin.