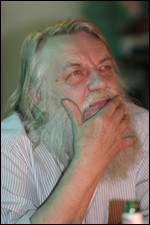 Robert Wyatt (born Robert Wyatt-Ellidge, 28 January 1945, in Bristol) is an English musician, and founding member of the influential Canterbury scene band Soft Machine.[1] He is married to English painter and songwriter Alfreda Benge.

Wyatt's mother, Honor Wyatt was a journalist who worked for the BBC, and his father, George Ellidge was an industrial psychologist who joined the family only when Wyatt was about six. As a teenager, Wyatt lived with his parents in Lydden near Dover where he was taught the drums by visiting American jazz drummer George Neidorf.

In 1962, Wyatt and Neidorf moved to Majorca where they stayed near the poet Robert Graves. The following year, Wyatt returned to England and joined the Daevid Allen Trio with Daevid Allen and Hugh Hopper. Allen subsequently left for France and Wyatt and Hopper formed The Wilde Flowers with Kevin Ayers, Richard Sinclair and Brian Hopper. Wyatt was initially the drummer in the Wilde Flowers, but following the departure of Ayers, he also became lead singer.

In 1966, the Wilde Flowers disintegrated, and Wyatt and Mike Ratledge formed the Soft Machine with Kevin Ayers and Daevid Allen. Here Wyatt both drummed and sang, an unusual combination for a stage rock band.[1]

In 1970, after chaotic touring, three albums and increasing internal conflicts in Soft Machine, Wyatt released his first solo album, The End of an Ear, which combined his vocal and multi-instrumental talents with tape effects.[1]

A year later, Wyatt left Soft Machine and, besides participating in the fusion bigband Centipede and drumming at the JazzFest Berlin's New Violin Summit, a live concert with violinists Jean-Luc Ponty, Don "Sugarcane" Harris, Micha Urbaniak and Nipso Brantner, guitarist Terje Rypdal, keyboardist Wolfgang Dauner and bassist Neville Whitehead[2], formed his own band Matching Mole (a pun on "machine molle", French for 'Soft Machine'), a largely instrumental outfit. After two albums and a split, Matching Mole were about to embark on a third record when, on 1 June 1973, during an alcohol-fueled party for Gong's Gilli Smyth and June Campbell Cramer (also known as Lady June) at the latter's Maida Vale home, an inebriated Wyatt fell from a third floor window. He was paralysed from the waist down and subsequently uses a wheelchair. On 4 November that year, Pink Floyd performed two benefit concerts, in one day, at London's Rainbow Theatre, supported by Soft Machine, and compered by John Peel. The concerts raised a reported £10,000 for Wyatt.

The injury led Wyatt to abandon the Matching Mole project, and his rock drumming (though he would continue to play drums and percussion in more of a "jazz" fashion, albeit obviously without the use of his feet). He promptly embarked on a solo-career, and with musician friends (including Mike Oldfield, the poet Ivor Cutler and Henry Cow guitarist Fred Frith), he released his acclaimed solo-album Rock Bottom.[1] Later that same year he put out a single, a cover version of "I'm a Believer", which hit number 29 in the UK chart.[1] Both were produced by Pink Floyd drummer Nick Mason and Wyatt would subsequently sing lead vocals on Mason's 1981, and first, solo album Fictitious Sports (with songwriting credits going to Carla Bley). There were strong arguments with the producer of Top of the Pops surrounding Wyatt's performance of "I'm a Believer," on the grounds that his wheelchair-bound appearance 'was not suitable for family viewing', the producer wanting Wyatt to appear on a normal chair. Wyatt won the day and 'lost his rag but not the wheel chair', but gave a performance that could best be described as disgruntled.

His follow-up single, a reggae ballad remake of Chris Andrews's hit "Yesterday Man" was nearly released by Virgin, but at the last minute it was shelved, "the boss at Virgin claiming that single was 'lugubrious', robbing Wyatt of a possible follow-up hit."[3]

Throughout the rest of the 1970s Wyatt guested with various acts, including Henry Cow (documented on their Henry Cow Concerts album), Hatfield and the North, Carla Bley, Eno, Michael Mantler, and Roxy Music guitarist Phil Manzanera, contributing lead vocals to lead track "Frontera", from Manzanera's 1975 solo debut Diamond Head. His solo work during the early 1980s was increasingly politicised, and Wyatt became a member of the Communist Party of Great Britain. In 1982, his interpretation of Elvis Costello's Falklands War-inspired song "Shipbuilding", the last in a series of political cover-versions (collected as Nothing Can Stop Us), reached number 36 in the UK singles chart and number 2 in John Peel's Festive Fifty for tracks from that year.

In the late 1980s, after collaborations with other acts such as News from Babel as well as Japanese recording artist Ryuichi Sakamoto, he and his wife Alfreda Benge spent a sabbatical in Spain, before returning in 1991 with a comeback album Dondestan, considered by many to be his best work since Rock Bottom. His 1997 album Shleep was also highly acclaimed.[1]

In 1999 he collaborated with the Italian singer Cristina Donà on her second album Nido. In the summer of 2000 her first EP Goccia was released and Wyatt made an appearance in the video of the title track.[1]

Wyatt contributed the haunting "Masters of the Field", as well as "The Highest Gander", "La Forêt Rouge" and "Hors Champ" to the soundtrack of the acclaimed 2001 film Winged Migration. He can be seen in the DVD's Special Features section, and is praised by the film's composer Bruno Coulais as being a big influence in his younger days.

Influence on other artists

The Tears for Fears song "I Believe" from Songs from the Big Chair (1985) is dedicated to Wyatt; the video features Roland Orzabal sitting shirtless in an arm chair for most of the video to mimic Wyatt's paralysis. As a further tribute to Wyatt, on the b-side of the single, Orzabal performs a cover version of "Sea Song", one of his most loved songs from the Rock Bottom album. This recording can also be found on the Tears For Fears compilation CD Saturnine Martial & Lunatic as well as later remastered versions of Songs from the Big Chair.

In June 2001, Wyatt was curator of the Meltdown festival, and sang "Comfortably Numb" during David Gilmour's performance at the festival, recorded on Gilmour's DVD David Gilmour in Concert.

In 2004, Wyatt collaborated with Björk on the song "Submarine" which was released on her fifth album Medúlla.

"He lives in Louth, Lincolnshire and he has equipment in his bedroom where he records himself and his albums. We brought a G4 and Pro Tools and recorded it in like one afternoon. He's such an extraordinary singer. Before he left, he insisted to give us a scale of his voice, where he sings all the tones and he has the most amazing range, like 5 or 6 octaves. What's really interesting about his range is that each octave is of a totally different character. We actually ended up using that later for "Oceania", we used what he calls the 'Wyattron'." Björk, Xfm, 25 August 2004

In 2006, Wyatt played with David Gilmour on Gilmour's new release On an Island, singing and playing cornet and percussion on "Then I Close My Eyes". Wyatt performed as a guest at Gilmour's series of Royal Albert Hall concerts, playing his cornet solo for this song. This is documented on the Remember That Night DVD and Blu-ray, released in 2007. Wyatt also read passages from the novels of Haruki Murakami for Max Richter's album Songs from Before.

In 2006, Wyatt collaborated with Steve Nieve and Muriel Teodori on the opera Welcome to the Voice. Wyatt interprets the character 'the Friend', both singing and playing pocket trumpet. Welcome to the Voice is an opera in one unique scene, on the street in front of an opera house. Wyatt's contribution to the recording was recorded at Phil Manzanera's home studio in North London. Welcome to the Voice was released in May 2007 on Deutsche Grammophon, and the recording features Robert Wyatt, Barbara Bonney, Sting, Amanda Roocroft, Elvis Costello, Nathalie Manfrino, Brodsky Quartet, Sara Fulgoni, Ned Rothenberg, Antoine Quessada, Marc Ribot, Steve Nieve and Muriel Teodori.

In March 2007, it was announced that Wyatt was working on a new solo album entitled Comicopera. It was released in October 2007 on the Domino Records label, a large independent label housing such big indie stars as Arctic Monkeys, Pavement, Neutral Milk Hotel and Elliott Smith.

In 2008, Domino re-released Wyatt's Drury Lane, Rock Bottom, Ruth Is Stranger Than Richard, Nothing Can Stop Us, Old Rottenhat, Dondestan, Shleep, EPs and Cuckooland on CD and vinyl.

In May 2009, Wyatt appeared on the album Around Robert Wyatt by the French Orchestre National de Jazz.[5]

In June 2009, Wyatt was asked by The Guardian who he considered the greatest living artist and chose the jazz musician Gilad Atzmon who he added "was born in Israel, which I prefer to call occupied Palestine".[6]

Recently the verb "Wyatting", named obviously after Robert Wyatt, appeared in some blogs and music magazines to describe the practice of playing weird tracks on a pub jukebox to annoy the other pub goers. The name was coined by Carl Neville, a 36-year-old English teacher from London, because one of the favourite LPs for this effect is Dondestan.

Robert Wyatt was quoted in The Guardian: as saying "I think it's really funny," and "I'm very honoured at the idea of becoming a verb."[7] However, when asked if he would ever try it himself, he said "Oh no. I don't really like disconcerting people. Although often when I try to be normal I disconcert anyway."[8]

Text by Robert Wyatt and illustrations by Jean-Michel Marchetti

This article uses material from the article Robert Wyatt from the free encyclopedia Wikipedia and it is licensed under the GNU Free Documentation License.

Wild At Heart Neo & Neo
Update Required To play the media you will need to either update your browser to a recent version or update your Flash plugin.