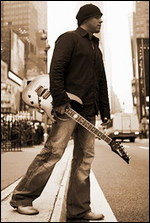 Zlatko Perica (born 16 February 1969 in Rijeka, Croatia) is a guitarist.

He has played for the German group Tangerine Dream,[1][2] but in 1994 recorded his last studio album with the band, and in 1997 he would appear on his last live album with them. In 2005 he was the lead guitarist in Swiss musician DJ Bobo's "Pirates of Dance" tour.

Shortly after his birth, due to family and economic circumstances, he and his mother migrated from Croatia to Berne, Switzerland. Although he had been a fan of music since early childhood, he didn't start playing the guitar until the age of 14. Later he attended the Guitar Institute of Technology in Los Angeles, California.

This article uses material from the article Zlatko Perica from the free encyclopedia Wikipedia and it is licensed under the GNU Free Documentation License.

Grey Debora Rusch
Update Required To play the media you will need to either update your browser to a recent version or update your Flash plugin.