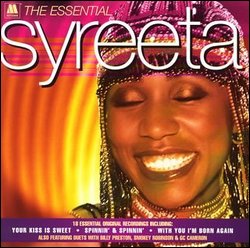 Syreeta Wright (August 3, 1946 – July 6, 2004), who recorded professionally under the single name Syreeta, was an American singer-songwriter, best known for her work with her ex-husband Stevie Wonder and musical artist Billy Preston.

Wright was born in Pittsburgh, Pennsylvania, in 1946, and started singing at age four. Her father served in the Korean War and Wright and her two sisters,[2] Yvonne and Kim, were raised by their mother Essie and their grandmother. The Wrights moved back and forth from Detroit to South Carolina before finally settling in Detroit just as Wright entered high school. Money problems kept Wright from pursuing a career in ballet so she focused her attention on a music career joining several singing groups before landing a job as a receptionist for Motown in 1965. Within a year, she became a secretary for Mickey Stevenson, just as Martha Reeves had done before her.

A year later, Edward Holland of the Holland–Dozier–Holland songwriting team noticed Wright's singing and decided to try her out for demos of Supremes' songs. Motown CEO Berry Gordy shortened her birth name to "Rita," and Wright released her first solo single, "I Can't Give Back the Love I Feel for You", in January 1968.[3] The song was initially written for the Supremes (by then billed as "Diana Ross & the Supremes"). They later recorded the song in 1968 and Diana Ross re-recorded the song for her solo album, Surrender.

Wright also performed demo vocals for the Supremes hit "Love Child" and Ross's "Something's On My Mind", which Ross later recorded for her self-titled debut album. When Diana Ross left the Supremes in early 1970, Motown boss Berry Gordy considered replacing her with Wright, but offered the place in the group to Jean Terrell. According to several sources, Gordy then changed his mind and tried to replace Terrell with Wright, but this was vetoed by Supreme Mary Wilson.[4]

Wright also sang background on records by the Supremes and by Martha and the Vandellas, notably singing the chorus to the group's modest hit single, "I Can't Dance to That Music You're Playing". Wright met labelmate Stevie Wonder in 1968, and the two began dating the following year. On the advice of Wonder, Wright became a songwriter. Their first collaboration, "It's a Shame", was recorded by The Spinners, in 1969. Motown withheld its release until July 1970. The song reached number 14 on the Billboard Hot 100. Wright also began singing background for Wonder, most notably on the hit "Signed, Sealed, Delivered (I'm Yours)", which Wright co-wrote with Wonder. In September 1970, after a year-long courtship, Wright, 24, and Wonder, 20, married in Detroit. The couple then wrote and arranged songs for Wonder's Where I'm Coming From, which was released much to Berry Gordy's chagrin in the spring of 1971. The Wonder–Wright composition "If You Really Love Me" (which also featured Wright prominently singing background vocals) reached number 8 in the US that year. In 1971, following Wonder's exit from Motown, the couple relocated to New York City where Wonder worked on two independent albums.

Wonder returned to Motown in 1972 after being promised creative control for his recordings, allowing Wonder to set up a company called Black Bull Productions. Wonder and Wright came with songs for Wonder's next album, Music of My Mind. Following a tour opening for The Rolling Stones in the summer of 1972, Wonder issued his follow-up, Talking Book, which turned out to be Wonder's breakthrough album. In between the albums, Wright decided to return to her own singing career. Motown reassigned the singer from Motown's Gordy imprint, where "I Can't Give Back the Love I Feel for You" was released, to Motown's L.A.-based MoWest subsidiary. Wonder and Wright had marriage troubles and divorced in the summer of 1972, ending their 18-month marriage. Following their divorce, Wonder oversaw the production of Wright's first solo album, Syreeta, which included Wright's take of Wonder's "I Love Every Little Thing About You" from Music of My Mind, the Smokey Robinson classic "What Love Has Joined Together", and The Beatles' "She's Leaving Home", which featured both Wonder and Wright applying background vocals via the talk box. MoWest issued "I Love Every Little Thing About You" in the late winter of 1972, but it failed to chart. Remaining best friends, Wright would continue to provide background vocals and compositions with Wonder for the next two decades.

In 1974, Wright was again reassigned, this time to the Motown label proper (in the U.S.), and issued her second release, the aptly-titled Stevie Wonder Presents: Syreeta that June. Following the success of Minnie Riperton's Perfect Angel, which Wonder also produced, Wonder wanted to present Wright in the same light as Riperton as a sensual vocalist. The covers also were very similar to each other. Riperton added background vocals to the album, promptly at the end of the album track "Heavy Day". The album yielded the UK singles "I'm Goin' Left" (covered by Eric Clapton and Jerry Butler), "Spinnin' and Spinnin'" and the reggae-flavored "Your Kiss Is Sweet", which became a UK Top 40, reaching number 12 in 1975.[5] The album also featured one duet with G. C. Cameron, formerly of the Spinners. The duo released the duet album Rich Love, Poor Love in 1977. Production on Wright's third album, One to One, went on for two years. The album featured the sole Wonder production, "Harmour Love", which found some success after being featured on the movie Junebug, and was mainly produced by Leon Ware, who also produced Marvin Gaye and Riperton.

Wright's next effort came courtesy of a chance meeting with Billy Preston, who had signed with Motown in early 1979. Motown assigned the two to collaborate on a pop ballad for the movie Fast Break. Wright and Preston provided the soundtrack of the film and their first collaboration, "With You I'm Born Again", resulted in an international hit reaching number-four US and number-two UK in late 1979. The success of the song led Motown to renew Wright's contract, which was due to expire that year, with neither side looking to renegotiate. Wright and Preston continued their collaborations until 1982. Wright still worked with Wonder during this period singing the lead vocals for their composition "Come Back as a Flower" for Wonder's Journey through the Secret Life of Plants and also sung alongside Wonder on his 1980 song "As If You Read My Mind" for his Hotter than July album. Wright continued to provide background vocals until Wonder's 1995 album Conversation Peace.

Wright continued to record for Motown into the 1980s, releasing her second self-titled album in 1980, and releasing the funk/boogie-oriented Set My Love in Motion in late 1981. During that same time period, she added vocals to the theme song for the Canadian slasher-horror flick Happy Birthday to Me, known for starring Little House on the Prairie′s Melissa Sue Anderson. The album featured the minor R&B hit "Quick Slick", which peaked at number 41 R&B in early 1982. Wright then issued The Spell in 1983 and left Motown two years later after collaborating with Smokey Robinson for the soundtrack to Berry Gordy's The Last Dragon in 1985. Wright briefly recorded for Motorcity Records before retiring from show business for good in the mid-1990s and settling in Los Angeles with her four children.

In 1993, she joined the national touring cast of Jesus Christ Superstar in the role of Mary Magdalene, alongside original film stars Ted Neeley and Carl Anderson (singer).[6] She stayed in the cast until 1995.[7]

Wright was married three times. Her first marriage, to longtime collaborator Stevie Wonder, lasted 18 months, from 1970 to 1972, while a marriage to bassist Curtis Robertson Jr.[8] was also short-lived. Wright briefly lived in Ethiopia in the mid-1970s, where she worked as a Transcendental Meditation teacher. She eventually settled in Los Angeles, where she lived for the rest of her life. Born and raised a Baptist, she converted to Islam following her third marriage.

Wright died in 2004 of congestive heart failure, a side effect of chemotherapy and radiation treatments she was receiving for breast and bone cancer.[9] She was buried in Inglewood Park Cemetery.

This article uses material from the article Syreeta Wright from the free encyclopedia Wikipedia and it is licensed under the GNU Free Documentation License.