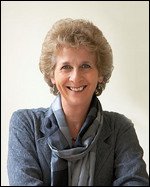 born on 13/5/1949 in Helmsley, Yorkshire and the Humber, United Kingdom

Jane Alison Glover CBE (born 13 May 1949) is a British-born conductor and musicologist.

Born in Helmsley, Glover attended Haberdashers' Monmouth School for Girls. Her father, Robert Finlay Glover MA TD, was headmaster of Monmouth School and it was through this connection that she was able to meet Benjamin Britten and Peter Pears aged only 16. She later described the meeting:

"I was beside myself with the prospect of hearing them perform. On the afternoon of the concert, the doorbell rang at the headmaster's house, and I went to answer it. There on the step, looking for all the world as they did on one of my record sleeves, distinguished, elegant and with the kindliest of eyes, were Peter Pears and Benjamin Britten my hero."

She read Music at St Hugh's College, Oxford, and went on to complete a DPhil on 17th-century Venetian Opera. She has published a 1978 biography of Francesco Cavalli, and included material derived from her doctoral thesis.

In 1990, after a sizeable donation, the Glover Music School was opened at Monmouth School by Jane Glover, in memory of her father.

Glover first conducted at Oxford as a student, in a production of Athalia, and went on to conduct the first performance in modern times of Cavalli's Rosinda for the Oxford University Opera Club in October 1973.[1] She made her professional debut at the Wexford Festival in 1975 with the first modern performance of Eritrea[2] and joined Glyndebourne in 1979. She was music director of Glyndebourne Touring Opera from 1981 to 1985. She has been both principal conductor and principal guest conductor of the Huddersfield Choral Society and continues to work with the choir on a semi-regular basis.[3] She conducted the world premiere of Il Giardino by Stephen Oliver at the Batignano Festival in 1977.[2]

During the 1980s, Glover regularly broadcast on BBC Television including hosting the television series Orchestra with Jane Glover in 1983 and Mozart – His Life with Music in 1985.

She holds a number of honorary degrees from several universities, is a Fellow of the Royal College of Music and has been the artistic director of opera at the Royal Academy of Music since 2009.[5] On 18 March 2011, she conducted the world premiere of Sir Peter Maxwell Davies's opera Kommilitonen! at the Academy.[6] She was created CBE in the 2003 New Year's Honours.

In September 2005, Macmillan published Glover's book Mozart's Women: His Family, His Friends, His Music. The book investigates the extent to which the women surrounding Mozart – his mother, sister, wife and his wife's sisters – influenced his development as a composer.

She has conducted opera at Royal Opera House, Covent Garden, English National Opera, Glyndebourne, Berlin Staatsoper, Royal Danish Opera, Opéra National du Rhin, Opéra National de Bordeaux, Glimmerglass Opera, New York City Opera, and Teatro La Fenice. In December 2013, she became the third woman ever to conduct at the Metropolitan Opera of New York, leading Mozart's The Magic Flute in the production of Julie Taymor; the New York Times wrote, "...Ms. Glover's appearance, and the magisterial performance and nuance she drew from the orchestra, were the news here."[7] She has been a regular collaborator with choreographer Mark Morris.

This article uses material from the article Jane Glover from the free encyclopedia Wikipedia and it is licensed under the GNU Free Documentation License.

Ella elle l'a France Gall
Update Required To play the media you will need to either update your browser to a recent version or update your Flash plugin.