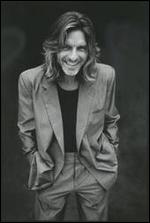 Mark Andes (born February 19, 1948) is an American musician, known for his work as a bassist with Spirit, Firefall, Heart, and Mirabal.

Andes was born in Philadelphia, but grew up in Los Angeles, one of two sons of Broadway, film, and television actor Keith Andes.

As a teenager, he was an early member of Canned Heat, but left before the band was signed to a recording contract. Andes was a founding member of the band Spirit. He played bass on their first four albums and on some subsequent reunion albums. During a bout with the flu, Mark co-wrote one of Spirit's first singles, "Mechanical World," with fellow Spirit member Jay Ferguson.

Spirit was noted for its hybrid sound of rock and jazz styles. The group released groundbreaking works such as Twelve Dreams of Dr. Sardonicus (1970), that were critically lauded later on, but commercial success largely eluded them at the time.

When the original line-up of Spirit broke-up in 1971, Andes and Jay Ferguson formed the band Jo Jo Gunne. He recruited his brother, Matt Andes, to play guitar. Andes only recorded one album with Jo Jo Gunne before semi-retiring from music around 1972. During his stay, the band had a Top 40 hit with the song "Run, Run, Run". When Jo Jo Gunne reformed for a new album and gigs in 2004, Andes was included in the line-up.

Andes moved to Boulder, Colorado, where he lived in the basement of local musician Jeff Reaves. In 1975, he was recruited by former Flying Burrito Brothers vocalist Rick Roberts and former Byrds drummer Michael Clarke to form the country-rock band Firefall. For six years, Mark would be in a band that had a string of hit singles, including the Top 10 hit, "You Are the Woman." During the early 1980s, Andes also collaborated briefly with future Yes guitarist Trevor Rabin and future Quiet Riot drummer Frank Banali.

Following a move back to California, and some session work, Andes joined a of Heart. He appeared on their final album for Sony Records, Passionworks (1983), and remained with the band until 1993. During this time, Heart found mainstream success, with several number one singles, and a number one album, Heart (1985). After a decade with Heart, Andes returned to session work.

In 1995, he joined up with Native American musician Robert Mirabal to collaborate on his album entitled Mirabal.

Andes now lives in Magnolia, Texas with his wife Valerie and will be releasing his first solo album, Real World Magic, in February 2009.

This article uses material from the article Mark Andes from the free encyclopedia Wikipedia and it is licensed under the GNU Free Documentation License.

Mon coeur sera ton coeur Natasha St-Pier feat. Thomas Pouzin
Update Required To play the media you will need to either update your browser to a recent version or update your Flash plugin.