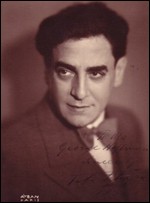 Schipa was born Raffaele Attilio Amedeo Schipa in Lecce into an Arbëreshë family;[1] his birthday was recorded as January 2, 1889 for military conscription purposes.[2] He studied in Milan and made his operatic debut at age 21 in 1910 at Vercelli. He subsequently appeared throughout Italy and in Buenos Aires in Argentina. In 1917, he created the role of Ruggiero in Puccini's La rondine.

In 1919, Schipa traveled to the United States, joining the Chicago Opera Company. He remained with the Chicago company until 1932, whereupon he appeared at the New York Metropolitan Opera from 1932 to 1935, and again in 1941. He also sang at the San Francisco Opera, beginning in 1924.

Schipa's artistry is preserved on film. For example, in 1929 he appeared in a Vitaphone movie short, singing "M'appari tutt'amor" from Flotow's opera Martha.

Schipa's stage repertoire, which in his early career had encompassed a wide range of Verdi and Puccini roles, eventually contracted to about 20 congenial Italian and French operatic roles, including Massenet's Werther, Donizetti's L'elisir d'amore and Cilea's L'arlesiana. In concert, Schipa performed a preferred array of lyrical operatic arias and songs, including Neapolitan and Spanish popular songs.

Schipa made numerous audio recordings of arias and songs during his career, beginning in Italy in 1913. His recorded output included a famous 78-rpm set of Donizetti's Don Pasquale, made in 1932. This is still in circulation on CD.

Like his contemporary Richard Tauber, Tito Schipa was also a Conductor, a tradition carried on today by Plácido Domingo. Although some contemporary critics considered Schipa's voice to be small in size, restricted in range and slightly husky in timbre, he was still extremely popular. Michael Scott (The Record of Singing: 1978), while admiring Schipa's charm and taste, points out that it is not correct to say that Schipa was a master of bel canto; indeed Scott and others regard Schipa's recording of "Il mio tesoro" from Mozart's Don Giovanni as one of the worst ever made, with sloppy runs and sketchy ornamentation. Yet surviving fragments from a live New Orleans performance of the opera in 1935 show him in far better form.

Although he undertook concert engagements until 1962, Schipa retired from the operatic stage in 1958 to teach voice, firstly in Budapest. He died from diabetes in 1965 at the age of 77 in New York City, while teaching there.

He was a National Patron of Delta Omicron, an international professional music fraternity.[3]

This article uses material from the article Tito Schipa from the free encyclopedia Wikipedia and it is licensed under the GNU Free Documentation License.

Luka Suzanne Vega
Update Required To play the media you will need to either update your browser to a recent version or update your Flash plugin.