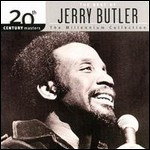 Jerry Butler (born Jerry Butler Jr., December 8, 1939, Sunflower, Mississippi)[1] is an American soul singer and songwriter. He is also noted as being the original lead singer of the famed R&B vocal group, The Impressions, as well as a 1991 Rock and Roll Hall of Fame inductee.

Butler is also an American politician. He serves as a Commissioner for Cook County, Illinois, having first been elected in 1985. As a member of this 17-member county board, he chairs the Health and Hospitals Committee, and serves as Vice Chair of the Construction Committee.

The mid-1950s had a profound impact on Butler's life. He grew up poor, having lived in Chicago's CabriniGreen housing complex. Music and the church provided solace from racial discrimination and inequality. He performed in a church choir with Curtis Mayfield. As a teenager, Butler sang in a gospel quartet called Northern Jubilee Gospel Singers, along with Mayfield. Mayfield, a guitar player, became the lone instrumentalist for the six-member Roosters group, which later became The Impressions. Inspired by Sam Cooke and the Soul Stirrers, the Five Blind Boys of Mississippi, and the Pilgrim Travelers, getting into the music industry seemed inevitable.[2]

Butler's younger brother, Billy Butler, also had a career in the music industry. Today, Billy plays guitar with Jerry's band, which tours throughout the country.

Butler wrote the song "For Your Precious Love" (which is ranked #327 on the Rolling Stone magazine's list of The 500 Greatest Songs of All Time) and wanted to record a disc. Looking for recording studios, The Impressions (the original members of which were Butler, Curtis Mayfield, Sam Gooden, Fred Cash (who left early on, and later returned), and brothers Arthur and Richard Brooks, auditioned for Chess Records and Vee-Jay Records. The group eventually signed with Vee-Jay, where they released "For Your Precious Love" in 1958. It became The Impressions' first hit and gold record.

Butler was dubbed the "Iceman" by WDAS Philadelphia disc jockey, Georgie Woods, while performing in a Philadelphia theater.[3]

He co-wrote, with Otis Redding, the song "I've Been Loving You Too Long" in 1965. Butlers solo career had a string of hits, including the Top 10 successes "He Will Break Your Heart", "Find Another Girl", "I'm A-Telling You" (all written by fellow Impression Curtis Mayfield and featuring Mayfield as harmony vocal), the million selling[1] "Only the Strong Survive", "Moon River", "Need To Belong" (recorded with the Impressions after he went solo), "Make It Easy On Yourself", "Let It Be Me" (with Betty Everett), "Brand New Me", "Ain't Understanding Mellow" (with Brenda Lee Eager), "Hey, Western Union Man", and "Never Give You Up". His 1969 "Moody Woman" release became a Northern Soul favourite and featured at number 369 in the Northern Soul Top 500. Butler released two successful albums, The Ice Man Cometh (1968) and Ice On Ice (1970). The Ice Man Cometh garnered Butler three Grammy nominations. He collaborated on many of his successful recordings with the Philadelphia-based songwriting team, Gamble and Huff. With Motown, in 1976 and 1977, Butler produced and co-produced (with Paul David Wilson) two albums: 1.) Suite For The Single Girl and 2.) It All Comes Out In My Song.

Tony Orlando and Dawn revived "He Will Break Your Heart" in 1975, with a new title, "He Don't Love You (Like I Love You)", and it was more successful than Butler's original, going to number one on the US Billboard Hot 100 pop chart.[2]

Butler continues to perform while serving as a Cook County Board Commissioner since the 1980s. As Cook County Commissioner, Butler voted to uphold a historic 2008 Cook County sales tax increase, which remains the highest in the nation. As a result the Chicago Tribune has encouraged people to vote against him in the 2010 elections.[5]

In recent years, he has served as host of PBS TV music specials such as Doo Wop 50 and 51, Rock Rhythm and Doo Wop, and Soul Spectacular: 40 years of R&B, among others. He has also served as Chairman of the Board of the Rhythm and Blues Foundation. In 1991, Butler was inducted, along with the other original members of the Impressions (Curtis Mayfield, Sam Gooden, Fred Cash, and Arthur and Richard Brooks), into the Rock and Roll Hall of Fame.[2]

Most recently, blues-rock duo The Black Keys covered "Never Give You Up" on their 2010 album, Brothers.

He currently resides in Chicago with his wife, Annettewho is one of his backup singers on the road. He has two sons, Randy and Tony, and a grandson.

| * no RnB charts published during the chart runs of these singles

This article uses material from the article Jerry Butler (singer) from the free encyclopedia Wikipedia and it is licensed under the GNU Free Documentation License.