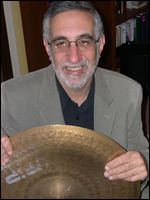 Eliot Zigmund (born April 14, 1945) is an American jazz drummer, who has worked extensively as a session musician.

Zigmund studied at Mannes School of Music and City College of New York, where he graduated in 1969. After moving to California, he found work in the 1970s playing with Ron McClure, Steve Swallow, Art Lande, Mike Nock, Mel Martin, and Vince Guaraldi. He moved back to New York City in 1974, where he played with Bill Evans from 1975 to 1978. He also played with Eddie Gómez, Bennie Wallace, Richard Beirach, Jim Hall, Chet Baker, Stan Getz, Fred Hersch, and Red Mitchell before the end of the 1970s.

Zigmund has also done work as a session player for Neil Sedaka, Dionne Warwick, and The Pointer Sisters, among others.

This article uses material from the article Eliot Zigmund from the free encyclopedia Wikipedia and it is licensed under the GNU Free Documentation License.

Sitting Here L!FE
Update Required To play the media you will need to either update your browser to a recent version or update your Flash plugin.