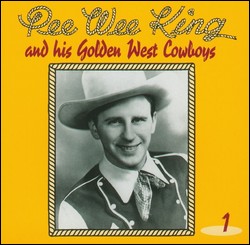 King was born in Abrams, Wisconsin to a Polish American family and lived in Abrams during his youth. He learned to play the accordion from his father, who was a professional polka musician. In the 1930s, he toured and made cowboy movies with Gene Autry.[1] King joined the Grand Ole Opry in 1937.

In 1946, while the bandleader of the Golden West Cowboys, King, together with the band's vocalist, Redd Stewart, composed "The Tennessee Waltz", inspired by "The Kentucky Waltz" by bluegrass musician Bill Monroe. King and Stewart first recorded "The Tennessee Waltz" in 1948, and it went on to become a country music standard, due, mainly, to the immense success of Patti Page's version of the song.

King's other songs included "Slow Poke" and "You Belong to Me", both co-authored with Chilton Price and Redd Stewart. His songs introduced waltzes, polkas, and cowboy songs to country music.

King was not permitted to use the drummer and trumpeter he featured on his stage shows when the band played at the Grand Ole Opry, where both instruments were banned. He ignored that ban only once, appearing at the Ryman in April, 1945 following the death of Franklin Delano Roosevelt. The Opry had been canceled, but since a number of fans showed up, management decided to have King perform his stage show for them. He used his full band, with drums and trumpet. When confronted about it afterward, King told Orpy emceed George D. Hay that he had done his stage show, as asked. Bob Wills, had defied the Opry ban on drums during a 1944 guest appearance,[2] In The Encyclopedia of Country Music. Paul Kingsbury, Editor. New York: Oxford University Press. pp. 80-81.</ref> His band also introduced on-stage dancing and Nudie Cohn's customized 'rhinestone cowboy' outfits[3] to the Opry which later became popular with Nashville and country musicians, including Elvis Presley.[4]

He joined producers Randall Franks and Alan Autry for the In the Heat of the Night cast CD Christmas Time’s A Comin’ performing "Jingle Bells" with the cast released on Sonlite and MGM/UA for one of the most popular Christmas releases of 1991 and 1992 with Southern retailers.

He died of a heart attack in Louisville, Kentucky, at age 86.

This article uses material from the article Pee Wee King from the free encyclopedia Wikipedia and it is licensed under the GNU Free Documentation License.

Til I Found You Jeremy Loops
Update Required To play the media you will need to either update your browser to a recent version or update your Flash plugin.