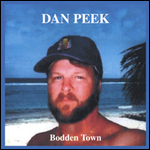 When Peek was a young boy, he suffered from rheumatoid arthritis and had to be hospitalized for weeks 100 miles (160 km) away from the family home; his parents could only visit occasionally. Peek remembered this experience when, about a year before he died, he decided to dispose of five of his vintage guitars. Because the Ronald McDonald Houses exist to provide housing for families of hospitalized children close to hospitals around the United States and the world, Peek donated these five guitars to the San Diego house, which were subsequently sold to a collector, resulting in a $50,000 donation.[4]

Peek moved to England in 1963 with his family when his father was assigned to a base in London, meeting Dewey Bunnell and Gerry Beckley at London Central High School.[3]

Beginning in 1963, Peek was educated at London Central Elementary High School at Bushey Hall in North London. In 1973 he married Catherine Maberry,[5] with whom he would write a number of songs, including "Lonely People".[6] He published an autobiography entitled An American Band, based on America's most successful period, and his own spiritual journey.[7]

Peek contributed lead and backing vocals, guitars, bass, keyboards, and harmonica to their recordings during his tenure in the band. As a member of America, Peek wrote or co-wrote four Top 100 singles: "Don't Cross the River" (No. 35), "Lonely People" (No. 5), "Woman Tonight" (No. 44), and "Today's the Day" (No. 23), all of which he also sang lead on. "Lonely People" and "Today's the Day" also hit No. 1 on the Billboard AC charts.[5]

Peek abused alcohol and other drugs during this period. In 2004 he released an autobiography about that era entitled An American Band: The America Story which was very difficult for him to write because of the bad memories it brought up.[1]

Peek left the band shortly after the February 1977 release of the Harbor album. Years of life on the road had taken a toll on him.[7] He renewed his Christian faith and had begun to seek a different artistic direction than Beckley or Bunnell. He went on to sign with Pat Boone's Lamb & Lion Records[7] and found modest success as a pioneering artist in the emerging Christian pop music genre.

Peek's debut solo album, All Things Are Possible, was released in 1979. Chris Christian co-wrote, produced, and contributed acoustic guitar and backing vocals on the album. The title track reached the Billboard charts, making the Top 10 in the A/C Billboard chart and number 1 in the Christian charts, becoming one of the earliest contemporary Christian music crossover hits. Another song on the album, "Love Was Just Another Word", was recorded in Los Angeles and written by Chris Christian and Steve Kipner. Gerry Beckley and Dewey Bunnell contributed the background vocals. This was the last time the three original members of America recorded together. At the 22nd Grammy Awards, the album was nominated,[2] losing in the Contemporary Gospel category to The Imperials album Heed the Call.

Peek waited five years before releasing a second solo album, 1984's Doer of the Word, which hit number 2 in the Christian charts. Gerry Beckley contributed background vocals, which were recorded at Chris Christian's studio in Los Angeles while Peek was there.[8] 1986 saw the release of his Electrovoice album, again to the CCM market, which included a remake of "Lonely People", featuring a very similar lead vocal treatment and overall arrangement to the original America version. He changed some of the song's lyrics to reflect his Christian faith;[9] for example, the lines "And ride that highway in the sky" and "You never know until you try" became "And give your heart to Jesus Christ".

Peek spent much of the 1990s in semi-retirement, occasionally recording music at his home in Bodden Town, Grand Cayman Island.[7] He released several solo projects and collaborated with Ken Marvin and Brian Gentry as "Peace" on three albums. In the years before his death, Peek released music via his website. His last musical collaboration was performing lead vocal on a track on the 2011 album Steps on the Water by Etcetera.

Peek died in his sleep of fibrinous pericarditis on July 24, 2011, at age 60 at his home in Farmington, Missouri.[1][10] His interment was in Farmington's Zolman Cemetery.

This article uses material from the article Dan Peek from the free encyclopedia Wikipedia and it is licensed under the GNU Free Documentation License.

Heicho Jill's Well
Update Required To play the media you will need to either update your browser to a recent version or update your Flash plugin.