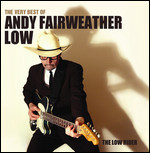 Fairweather Low was born in Ystrad Mynach, Wales.[2] He first found fame as a founder member of the pop group Amen Corner in the late 1960s. They had four successive Top 10 hits in the UK Singles Chart, including the #1 single "(If Paradise Is) Half as Nice" in 1969.[3][4] The overnight success and Fairweather Low's teen idol looks, as music journalist William Ruhlmann noted at Allmusic; "... put his attractive face on the bedroom walls of teenage girls all over Britain".[1]

The band split in two in 1970, with Fairweather Low leading Dennis Byron (drums), Blue Weaver (organ), Clive Taylor (bass) and Neil Jones (guitar) into a new band, Fair Weather. The band scored a UK Singles Chart #6 hit with "Natural Sinner" in July 1970, although the outfit's albums, Beginning From An End and Let Your Mind Roll On, failed to chart.[5] After twelve months Fairweather Low left to pursue a solo career, releasing four albums up to 1980 on A&M and Warner Bros.[1] These spawned further single chart success with "Reggae Tune" (1974), and "Wide Eyed and Legless", a #6 Christmas time hit in 1975.[5]

In the late 1970s and 1980s he worked for numerous artists, as a session musician, performing as a backing vocalist and guitarist on albums by Roy Wood, Leo Sayer, Albion Band, Gerry Rafferty, Helen Watson and Richard and Linda Thompson.

In 1978, Fairweather Low sang backing vocals on the album Who Are You, from The Who, specifically on the tracks "New Song", "Had Enough", "Guitar and Pen", "Love is Coming Down", and "Who Are You". After filling in on guitar during rehearsals for the Who's 1982 album It's Hard while Pete Townshend was in rehab, he ended up on the album itself, playing rhythm guitar on the song "It's Your Turn". Fairweather Low later appeared on Townshend's 1993 album Psychoderelict and the accompanying concert tour.

In 1995, Fairweather Low played rhythm guitar on Joe Satriani's self-titled CD, along with Nathan East on bass and Manu Katché on drums. One reviewer commented that "this backup band extremely gifted backup musicians sincerely adds a diverse range of textures and colors, bringing out a much-needed live feel to an otherwise bland album of blues-oriented jazz-rock." [6]

Fairweather Low has worked with Roger Waters since Waters' The Pros and Cons of Hitchhiking tour of America in 1985. He contributed to two of Waters' albums Radio KAOS in 1987 and Amused to Death in 1992. He played guitar and bass on Roger Waters' all-star performance of The Wall Live in Berlin 21 July 1990, on the 1999-2002 In the Flesh world tour and was playing on Waters' Dark Side of the Moon Live world tour in 2006[1] and 2007, but was not able to perform with him in 2008.[7] His role was picked up by session guitarist Chester Kamen.

1992 saw him associate more with projects alongside Eric Clapton. Fairweather Low had earlier appeared in Clapton's band in the 1983 ARMS concerts for Ronnie Lane and, while he has continued to do session work for various people, including Dave Edmunds, Fairweather Low has spent most of his time since the early 1990s as a sideman in Clapton's backing band, as well as session work; notably Clapton's Unplugged concerts, as well as on From The Cradle. In the same year, he was present on tours with the 1999 Linda Ronstadt and Emmylou Harris collaboration. In December 1991, he played guitar on George Harrison's Live in Japan, along with the rest of Clapton's band,[1] and in 2002, he played several of the lead guitar parts for the Harrison tribute The Concert for George, on some songs playing Harrison's famous Fender Stratocaster "Rocky" and Harrison's gold Fender Electric XII. In 2004 he appeared in the Stratpack concert, celebrating 50 years of the Fender Stratocaster.

From 1998 to 2002 he played in Roger Waters' In the Flesh tour. Whilst in 2001, Fairweather Low accompanied Eric Clapton on his world tour and is featured on the 2002 album One More Car, One More Rider, which also features accompaniment by Billy Preston, Steve Gadd, Nathan East and David Sancious.

In 2002 Fairweather Low featured on From Clarksdale To Heaven - Remembering John Lee Hooker with, amongst others, Jeff Beck, Gary Brooker, Jack Bruce and Peter Green.

By 2005 he toured extensively with Bill Wyman's Rhythm Kings.[1] Some of the concerts were recorded for UK television, as part of their "50 Years Of Rock 'n' Roll" tribute. In April 2005 he played in the Gary Brooker Ensemble's charity concert at Guildford Cathedral, Surrey, in aid of the Tsunami Appeal.

In 2006 Fairweather Low toured with Roger Waters once more, this time for the latter's The Dark Side of the Moon tour, and with Bill Wyman's Rhythm Kings. In the same year Fairweather Low toured with Chris Barber and the Big Chris Barber Band reprising many of his earlier hits, including "Gin House Blues" and "Worried Man Blues". Some of these performances form part of Barber's latest CD, Can't Stop Now, featuring new arrangements by Barber's staff-arranger and trombonist, Bob Hunt.

In 2007, he continued touring with Roger Waters' Dark Side of the Moon Tour. Later that year he was on the road with his own Sweet Soulful Music tour, performing at venues such as the Stables in Wavendon, The Ferry in Glasgow and the Library Theatre, Darwen, Lancashire.

In May 2008 'Andy Fairweather Low & The Low Riders' started a UK tour, the Low Riders being Paul Beavis, Dave Bronze and Richard Dunn.

He performs with Edie Brickell, Steve Gadd, and bassist (and fellow Welshman) Pino Palladino as The Gaddabouts; their eponymous album was released in early 2011.

Also in 2011, Fairweather Low made a guest appearance on Kate Bush's album, 50 Words For Snow, singing on the chorus of the album's only single, "Wild Man".[10]

In 2013, he opened Eric Clapton's shows with his band the Lowriders on Clapton's European tour and, later that year, Andy Fairweather Low and The Lowriders released the album, Zone-O-Tone.[11] In April 2013, he appeared at the Eric Clapton Guitar Festival Crossroads in New York and featured on two tracks of the DVD of the concert. On November 13 and 14, he was also part of Eric Clapton's band on the occasion of Clapton's two concerts during the "Baloises Sessions" in Basel, Switzerland.

This article uses material from the article Andy Fairweather Low from the free encyclopedia Wikipedia and it is licensed under the GNU Free Documentation License.