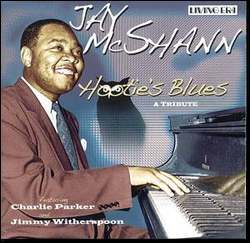 McShann was born in Muskogee, Oklahoma, and was nicknamed Hootie.[1] Musically, his education came from Earl Hines's late-night broadcasts from Chicago's Grand Terrace Cafe: "When 'Fatha' [Hines] went off the air, I went to bed".[2] He began working as a professional musician in 1931, performing around Tulsa, Oklahoma, and neighboring Arkansas.

The band played both swing and blues numbers but played blues on most of its records; its most popular recording was "Confessin' the Blues". The group disbanded when McShann was drafted into the Army in 1944. The big-band era being over, he was unable to successfully restart his career after the war ended.

After World War II McShann began to lead small groups featuring the blues shouter Jimmy Witherspoon. Witherspoon started recording with McShann in 1945 and fronting McShann's band; he had a hit in 1949 with "Ain't Nobody's Business". As well as writing much material, Witherspoon continued recording with McShann's band, which also featured Ben Webster. McShann had a modern rhythm and blues hit with "Hands Off", featuring a vocal by Priscilla Bowman, in 1955.

In the late 1960s, McShann became popular as a singer as well as a pianist, often performing with violinist Claude Williams. He continued recording and touring through the 1990s. Well into his 80s, McShann still performed occasionally, particularly in the Kansas City area and Toronto, Ontario, where he made his last recording, "Hootie Blues", in February 2001, after a recording career of 61 years. In 1979, he appeared prominently in The Last of the Blue Devils, a documentary film about Kansas City jazz.

McShann died on December 7, 2006, in Kansas City, Missouri, at the age of 90.[5] He was survived by his companion of more than 30 years, Thelma Adams (known as Marianne McShann), and three daughters.

The Rolling Stones recorded a cover version of "Confessin' the Blues" on their album Five by Five (1964). The song was written by McShann and Walter Brown in the 1940s. The crime-fiction writer Elmore Leonard featured McShann as a character in his 2005 novel The Hot Kid.

This article uses material from the article Jay McShann from the free encyclopedia Wikipedia and it is licensed under the GNU Free Documentation License.