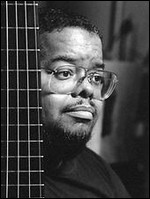 Anthony Jackson has been a distinctive voice on the electric bass ever since he entered the scene in New York City. He began learning the piano as a teen before switching to the guitar, and finally picking up the bass after being influenced by legendary Motown bassist James Jamerson (see "Influences" below).

He was a student of Jerry Fisher (guitar), 196465, Lawrence "Larry" Lucie (theory), 1969, Pat Martino (theory), 1973. He had live performances in more than 30 countries, and also had more than 3000 recording sessions with more than 500 albums. Jackson's unforgettable throbbing bass introduction for the O'Jays' "For The Love Of Money" (on their classic album "Ship Ahoy") earned him a co-writer's credit on the song alongside Gamble & Huff. [2]

Jackson initially invented what has now caught on as the six-string bass, - a bass guitar tuned B-E-A-D-G-C. His idea, which he called the contrabass guitar, precedes any modern standard six-string bass by at least twenty years.

Jackson said that the idea for adding more strings to what was previously the Fender bass came from a limited range and frustration with the decreased sonority and loss of upper range of de-tuned strings. When asked what he thought of criticism of the six-string bass, Jackson replied:

Why is four [strings] the standard and not six? As the lowest-pitched member of the guitar family, the instrument should have had six strings from the beginning. The only reason it had four was because Leo Fender was thinking in application terms of an upright bass, but he built it along guitar lines because that was his training. The logical conception for the bass guitar encompasses six strings.

Though Jackson came up with the idea some years previously and, in 1974, first approached various luthiers about the construction of his idea, he began playing the six-string bass exclusively in 1981. Carl Thompson built the first six-string for Jackson in 1975 (an instrument currently owned by Les Claypool of Primus), but he later switched to basses built by Vinnie Fodera and Joey Lauricella.

Jackson actually began music playing guitar, and in fact studied with renowned jazz guitarist Pat Martino but, as he put it,

I continued playing standard as well as bass guitar until 1968, when I was forced to admit that my standard guitar playing should be quietly put to death.

This initial exposure to the guitar and later transfer to the bass were a significant part of what determined Jacksons attitude to the bass: that it is also a guitar, and simply the lowest-pitched member of the guitar family, and not simply a louder, easier, solid-body version of the upright bass, built by a guitar builder for upright players.

Judging by numerous album sleeve notes, in which Jackson is credited as playing the contrabass guitar, as opposed to simply bass, or electric bass, Jackson seems to believe in the continuing importance of the link between the electric bass and the guitar, though he would be unlikely to deny that the actual role of his instrument is quite different from that of a traditional guitar. The way in which he has talked about the instrument, especially in the context of his innovation of it, suggests comparison with the relationship between other instruments that share a family, such as violin, viola, cello, and contrabass. The electric bass was, as Jackson sees it, made in terms of the upright bass for marketing reasons, though it is really a guitar.

Jackson always plays sitting down. He cites his main influences as James Jamerson, Jack Casady of Jefferson Airplane, and French composer Olivier Messiaen. Jamersons influence on Jackson is quite easily perceptible to anyone familiar with both players, particularly on Jamerson tracks like How Long Has That Evening Train Been Gone? by Diana Ross and The Supremes. The use of arpeggiation and passing notes for simultaneous chordal and rhythmic expression and brief unison passages with the melody or other instruments are telltale.

Jackson was also influenced by Jack Casady. As Jackson said in a 1990 interview in Bass Player magazine.

Casady, whom I'd first heard on Jefferson Airplane's Surrealistic Pillow album in late 1966, had a big, rich, metallic sound with a full bottom and a curious, guitaristic way of playing that I was immediately drawn to. When I saw him perform live, I was struck by his dignity and serious mien.

It was Casady's sound that kept me exploring the expressive possibilities of using the pick. To this day, when I use one and a flanger, Casady's influence emerges and can be clearly detected by an aficionado.

Jacksons other major influence is Olivier Messiaen, whose music Jackson said changed his life irrevocably and forever. It was Messiaens organ suite La Nativité du Seigneur that so impressed Jackson that he remarked:

I hear the tritone as the central interval on which to build harmonies and melodies, as opposed to the major or minor third The tritone interval has been extremely important to me from the first day I heard Messiaen playing his own music on organ.

In listening to Jackson play, especially in freer contexts, one really can hear the tritone very frequently as he moves around the enormous 36, 28-fret six-string fretboard of his Fodera contrabass guitar.

This article uses material from the article Anthony Jackson (musician) from the free encyclopedia Wikipedia and it is licensed under the GNU Free Documentation License.

Playground Commitment Rules Pablopolar
Update Required To play the media you will need to either update your browser to a recent version or update your Flash plugin.