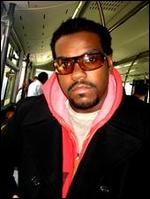 Jerkins' father was an Evangelical pastor and he began playing piano at 5 years of age, following his brother and father who both played at church gatherings. At the age of 14, Jerkins was mentored by his idol, Teddy Riley, but he did not accept a contract offer to work with the producer due to an aspiration to build an "empire" without such support.[4]

Jerkins' first recorded output was a "gospel rap" collaboration with his brother, Fred Jerkins III, entitled On The Move. He later incorporated the name "Darkchild", at the age of 17, subsequently accepting a worldwide publishing deal with the EMI Music Corporation. The producer then proceeded to establish a commercial music career, initially working with artists such as Joe, Mary J. Blige and Brandy.[4]

When asked by Ryan Seacrest in 2013 the favourite people he's produced for he said "Definitely The Saturdays. Without a doubt. I had a lot of fun working with them and was really impressed with their voices. They were very down to earth and I like that a lot in an artist. I wish them all the best in America and think they could end up as big as The Spice Girls."[8]

In 2006, he was appointed VP of Artists & Repertoire (A&R) for The Island Def Jam Group. Jerkins released his wife Joy Enriquez's second album Atmosphere Of Heaven, which features a religious direction, on his independent gospel imprint JoyFul Child Records. The Darkchild name has been loaned to Darkchild Gospel, a record company run by Jerkins' brother, Fred Jerkins III.[9] which released the latest album from Virtue - Testimony.

In late 2008, Jerkins joined Nicholas Longano, Ray Brown, and Jonathan E. Eubanks in creating Music Mogul, Inc.[10] MusicMogul.com represents an entirely browser-based online destination where celebrity artists can unite with their fans. Aspiring artists, songwriters and producers have a chance to be discovered as the next superstar. It is responsible for discovering up and coming producer/songwriter Keri Malena out of Dallas Texas who is making a good name for himself producing quality music. As a result of this exposure, Mr. Malena, as he is called, is now appearing on major label releases such as, Justin Bieber, Lady Gaga, Keyshia Cole, Jamie Foxx, among others. Each quarter, members vote for the best video performances.[11] The top performers are then flown to Los Angeles to compete in front of a panel of celebrity judges. The winner gets a demo deal with Darkchild Productions.[12]

This article uses material from the article Rodney Jerkins from the free encyclopedia Wikipedia and it is licensed under the GNU Free Documentation License.

Walk On The Ocean Toad The Wet Sprocket
Update Required To play the media you will need to either update your browser to a recent version or update your Flash plugin.