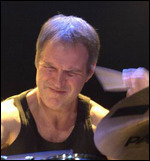 Paul Wertico (born January 5, 1953 in Chicago) is an American drummer. He gained recognition as a member of the Pat Metheny Group from 1983 until 2001,[1] leaving the group to spend more time with his family and to pursue other musical interests. Metheny heard the Simon Bard Group with Wertico and bassist Steve Rodby, and invited both to join his band. During his tenure with Metheny Wertico played on ten recordings and four videos, appeared on television and toured around the world. He also won seven Grammy Awards (for Best Jazz Fusion Performance, Best Contemporary Jazz Performance and Best Rock Instrumental Performance) and magazine polls, and received several gold records.

In recent years, Wertico has continued to tour and perform around the Chicago metropolitan area, where he is based. This led to the creation of his own band (the Paul Wertico Trio) and collaborations with jazz notables such as Larry Coryell, Kurt Elling and Jeff Berlin. These collaborations enabled Wertico to be featured on group recordings in a variety of musical genres, and gave him an opportunity to produce records. In 2009, Wertico's trio joined forces with Marbin, which consists of Israeli musicians Danny Markovitch (saxophone) and Dani Rabin (guitar). The group performs as Paul Wertico's Mideast-Midwest Alliance, and recorded an album for the Chicago Sessions label. The recording received positive reviews from the Chicago Tribune, Drum! and Modern Drummer. It received a 4.5 (out of 5)-star rating by Down Beat, and was rated one of the best 50 albums of 2010.

When not touring, Wertico divides his career among session work, producing, teaching, composing and leading his own groups. Among the musicians with whom he has played are Eddie Harris, Lee Konitz, Dave Liebman, Sam Rivers, Bob Mintzer, Terry Gibbs, Buddy DeFranco, Roscoe Mitchell, Evan Parker, Jay McShann, Herbie Mann, Randy Brecker, Jerry Goodman and Ramsey Lewis and many others. Wertico is a member of the Larry Coryell Trio. From 2000 to 2007, he was a member of the platinum-record-winning Polish progressive rock band SBB. Wertico's playing has been compared to that of an Impressionist painter; he has also been described as "an inspired madman", "a restless innovator", "a true legend of jazz drums", "a master of drumming insanity" and "a genius of the sticks". In 2004 Wertico was honored as a Chicagoan of the Year by the Chicago Tribune; he has been recommended by that newspaper and the Chicago Sun-Times for album-of-the-year awards.

Wertico is also active in the field of education. In addition to teaching drums privately for 40 years, he is Assistant Professor of Jazz and Head of Jazz Studies at the Chicago College of Performing Arts of Roosevelt University in Chicago.[2] Wertico has also served on the faculty of the percussion and jazz-studies programs at the Bienen School of Music at Northwestern University in Evanston, Illinois. He has written educational articles for magazines such as Modern Drummer, Drum!, Drums & Drumming, Drum Tracks and Down Beat, and for Musician.com. Wertico conducts drum clinics and master classes at universities, high schools and music stores. He has released two instructional videos: "Fine-Tuning Your Performance" and "Paul Wertico's Drum Philosophy."

Wertico's debut CD as a leader, "The Yin And The Yout", received a four-star rating in Down Beat. His 1998 trio CD, "Live In Warsaw!", received 4½ stars from Down Beat and featured guitarist John Moulder and bassist Eric Hochberg. The trio's 2000 studio recording, entitled "Don't Be Scared Anymore", received reviews of "This album is like the soundtrack to the world's coolest vacation" from All About Jazz and "Jazz-rock in the truest sense" from Allmusic. Wertico's 2004 CD, "StereoNucleosis", was released to positive reviews. The Chicago Tribune wrote: "A brilliant release - Wertico shows a thrilling disregard for stylistic boundaries. 'StereoNucleosis' is one of the most intelligent, creative and alluring percussion recordings of the past decade. Wertico reaffirms his position among the most restlessly inventive drummers working today". Allmusic reported: "Wertico and his players have done something wonderful and rare: they've actually created something not only different, but also truly new". LA Weekly wrote: "His recent records, such as 2000's 'Don't Be Scared Anymore' and the new 'StereoNucleosis' are stunning examples of the electronic, rhythmic and intellectual directions jazz could be going" (sic). Wertico's 2006 CD "Another Side" was released on the audiophile Naim Label; it was described as "a brilliant collaborative effort between these three uniquely talented musicians".

Wertico has also released nine recordings as co-leader: a self-titled LP, "Earwax Control", and a live Earwax Control CD entitled ,2 LIVE"; a self-titled LP, "Spontaneous Composition"; a drum/percussion duo CD (with Gregg Bendian) entitled "BANG!"; a double-guitar/double-drum three-CD set (with Derek Bailey, Pat Metheny and Bendian) entitled "The Sign Of 4"; and two piano/bass/drums trio CDs (with Laurence Hobgood and Brian Torff) entitled "Union" and "State Of The Union." In 2007 Wertico and Brian Peters released their CD, "Ampersand," which Drummerszone.com called "Simply a musical masterpiece" and Classic Drummer described as "one of the most ambitious records ever released. Recorded over a period of four years, it documents a completely new approach to combine elements of both Rock and Jazz music while resulting in a very listenable and captivating final product". That same year he released "Jazz Impressions 1" with pianist Silvano Monasterios and bassist Mark Egan. Chicago Jazz wrote: "From the first note of Jazz Impressions, you know you're in for something interesting and different. What these three do with that format, however, is nothing short of breathtaking".

In addition to Wertico's awards as a member of the Pat Metheny Group, he was voted Fusion Drummer Of The Year in Drum!'s readers' poll and placed in the top five in the electric-jazz category in Modern Drummer's readers' polls. Wertico has appeared on the covers of Drum Tracks, Modern Drummer, Chicago Jazz, Percussioni (Italy), Belgo Beat (Belgium), PerQsja (Poland) and Bateristas al Sur (South America). He was a featured clinicians at the 1994, 1999 and 2002 Percussive Arts Society International Conventions and the 1997 Modern Drummer Festival, and performed in videos at two of those events. Wertico is featured on the Drum Workshop videos "The American Dream II" and "The American Dream III."

This article uses material from the article Paul Wertico from the free encyclopedia Wikipedia and it is licensed under the GNU Free Documentation License.

Beautiful Girl INXS
Update Required To play the media you will need to either update your browser to a recent version or update your Flash plugin.