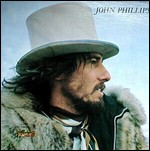 John Edmund Andrew Phillips (August 30, 1935 March 18, 2001) was an American singer, guitarist, songwriter and promoter, most notably of the 1967 Monterey Pop Festival, a landmark event of the counterculture era. Known as Papa John, Phillips was a member and leader of the vocal group, The Mamas & the Papas.

Phillips was born in Parris Island, South Carolina. His father, Claude Andrew Phillips, was a retired United States Marine Corps officer who won an Oklahoma bar from another Marine in a poker game on the way home from France after World War I. His mother, Edna Gertrude (née Gaines),[1] who had English[2] and claimed Cherokee ancestry, met his father in Oklahoma. According to his autobiography, Papa John, Phillips' father was a heavy drinker who suffered from poor health.

Phillips grew up in Alexandria, Virginia, where he was inspired by Marlon Brando to be "street tough". From 1942 to 1946, he attended Linton Hall Military School in Bristow, Virginia; according to his autobiography, he "hated the place," citing "inspections" and "beatings," and recalls that "nuns used to watch us take showers."[3] He formed a group of teenage boys, who also sang doo-wop songs. He played basketball at George Washington High School, now George Washington Middle School in Alexandria, Virginia, where he graduated in 1953, and gained an appointment to the Naval Academy. However, he resigned during his first (plebe) year. Phillips then attended HampdenSydney College, a liberal arts college for men in Hampden Sydney, Virginia, but dropped out in 1959.

Phillips longed to have success in the music industry and traveled to New York to find a record contract in the early 1960s. His first band, The Journeymen, was a folk trio, with Scott McKenzie and Dick Weissman. They were fairly successful, putting out three albums and several appearances on the 1960s TV show, Hootenanny. All three albums, as well as a compilation known as Best of the Journeymen, have since been reissued on CD. He developed his craft in Greenwich Village, during the American folk music revival, and met future The Mamas & the Papas group vocalists Denny Doherty and Cass Elliot there around that time. Lyrics of the group's song "Creeque Alley" describe this period.

The Journeymen were the house band of the hungry i on Broadway, San Francisco for many years.

The Mamas & the Papas

Phillips was the primary songwriter and musical arranger of The Mamas & the Papas. Early in the group's history, Phillips and his second wife Michelle Gilliam were responsible for writing most of the groups songs. Phillips would often come up with a melody and some lyrics and Michelle would help him complete the lyrical portion of the song. In a 1968 interview, Phillips described some of his arrangements as "well arranged two-part harmony moving in opposite directions".[4] After being signed to Dunhill, they had several Billboard Top Ten hits, including "California Dreamin'", "Monday, Monday", "I Saw Her Again", "Creeque Alley", and "12:30 (Young Girls Are Coming to the Canyon)". John Phillips also wrote "San Francisco (Be Sure to Wear Flowers in Your Hair)", in 1967 for former The Journeyman band mate, Scott McKenzie.[4] "San Francisco" is widely regarded as emblematic of 1960s American counterculture music. Phillips also wrote the oft-covered "Me and My Uncle", which was a favorite song cover frequently performed by The Grateful Dead.

Phillips also helped promote and performed with The Mamas & the Papas in the Monterey International Pop Music Festival held June 16 to June 18, 1967 in Monterey, California. The festival was planned in just seven weeks and was developed as a way to validate rock music as an art form in the way jazz and folk were regarded. It was the first major pop-rock music event in history.

John and Michelle Phillips became Hollywood celebrities, living in the Hollywood Hills and socializing with stars such as Jack Nicholson, Warren Beatty, and Roman Polanski. The Mamas & the Papas broke up in 1968 largely because Cass Elliot wanted to go solo and because of some personal problems among Phillips, his wife Michelle, and Denny Doherty, including his wife's affair with Doherty. As Michelle Phillips later recounted, "Cass confronted me and said 'I don't get it. You could have any man you want. Why would you take mine?'" Michelle had been fired briefly in 1966, for having had affairs with both Gene Clark and Doherty, and was replaced for a period of two months by Jill Gibson, their producer Lou Adler's girlfriend. Although Michelle Phillips was forgiven and asked to return to the group, the personal problems would continue until the group split. Cass Elliot went on to have a successful solo career until her death from heart failure in 1974.

Phillips released his second solo album John, the Wolf King of L.A. in 1970. The album was not commercially successful, although it did include the minor hit "Mississippi", and Phillips began to withdraw from the limelight as his use of narcotics increased.

Phillips produced his third wife, Genevieve Waite's, album, Romance Is On the Rise and wrote music for films. Between 1969 and 1974, Phillips and Waite worked on a script and composed over 30 songs for a space-themed musical called Man On The Moon, which was eventually produced by Andy Warhol but played for just two days in New York after receiving disastrous opening night reviews.

Phillips moved to London in 1973; Mick Jagger encouraged him to record another solo album. It was to be released on Rolling Stones Records and funded by RSR distributor Atlantic Records. Jagger and Keith Richards would produce and play on the album, as well as former Stone Mick Taylor and future Stone Ronnie Wood. The project was derailed by Phillips' increasing use of cocaine and heroin, substances that he shot into his body, by his own admission, "almost every fifteen minutes for two years".[5] In 2001, the tracks of the Half Stoned or The Lost Album album were released as Pay Pack & Follow a few months after Phillips' death. In 1975 Phillips, still living in London, was commissioned to create the soundtrack to the Nicolas Roeg film The Man Who Fell to Earth, starring David Bowie. Phillips asked Mick Taylor to help out; the film was released in 1976.

In 1981, Phillips was convicted of drug trafficking; subsequently, he and his television star daughter Mackenzie Phillips made the rounds in the media, instructing kids and their parents how not to become addicts. This public relations campaign helped reduce his prison time to only a month in jail of which he spent 3 weeks (1 week off for good behavior) at Allenwood Prison Camp, Allenwood Pa. Upon release, he re-formed The Mamas & the Papas, with Mackenzie Phillips, Spanky McFarlane (of the group Spanky and Our Gang) and Denny Doherty. Throughout the rest of his life, Phillips toured with various versions of this group.

In 1986, his best-selling autobiography, Papa John, was published. With Terry Melcher, Mike Love and his former Journeyman colleague Scott McKenzie, he co-wrote the number 1 single for the Beach Boys, "Kokomo", which was also nominated for a Grammy Award in the Best Song Written specifically for a Motion Picture or Television category (it lost to Phil Collins's "Two Hearts", from the film "Buster").

In the 1990s, his years of addiction led to the need for a liver transplant in 1992. Several months later, however, he was photographed drinking alcohol in a bar in Palm Springs, California, as published in the National Enquirer newspaper. Phillips was questioned about the photo on the Howard Stern radio show, and explained, "I was just trying to 'break in' the new liver".

Phillips married Susan Adams, the daughter of a wealthy Virginia family, in 1959. They had a son, Jeffrey, and a daughter, Laura Mackenzie (known as "Mackenzie") Phillips. While touring California with The Journeymen, Phillips met teenage Michelle Gilliam, with whom he had an extramarital affair. Their affair forced the dissolution of his marriage to Adams, and he married Michelle in 1962. The couple had one child together, Chynna Phillips, vocalist of the 1990s' pop trio Wilson Phillips. They divorced in 1970.

Actress Geneviève Waïte became his third wife in 1972. The couple had two children, Tamerlane and Bijou Phillips. Reportedly, both parents were drug addicts and infidelity marked their marriage. Phillips and Waite divorced in 1985.

In September 2009, eight years after Phillips' death, his eldest daughter Mackenzie claimed that she and her father had a ten-year incestuous relationship. Mackenzie wrote of the relationship, which she said began when she was 18 years old in 1979, in her memoir High On Arrival. Mackenzie wrote that the relationship began after Phillips raped her while they were both under the influence of heavy narcotics on the eve of her first marriage.[6] Mackenzie Phillips appeared on The Oprah Winfrey Show on September 23, 2009, in which she told Winfrey that her father injected her with cocaine and heroin. According to Phillips, the incestuous relationship ended when she became pregnant and did not know who had fathered the child. These doubts resulted in an abortion, which her father paid for, "and I never let him touch me again."[7][8]

Chynna Phillips, Mackenzie's half-sister, stated that she believed Mackenzie's statements and that Mackenzie first told her about the relationship during a phone conversation in 1997, approximately eight years after Mackenzie said the relationship had ended.[9] Jessica Woods, the daughter of Denny Doherty, said that her father knew of the relationship.[10] Bijou Phillips, Mackenzie's other half-sister, said in a statement that Mackenzie had informed her of the relationship when Bijou was 13 years old,[11] but also stated, "I'm 29 now, I've talked to everyone who was around during that time, I've asked the hard questions. I do not believe my sister. Our father is many things, this is not one of them."[12] Geneviève Waïte, Bijou's mother and Phillips' wife at the time the abuse allegedly occurred, denied the allegations and said they were inconsistent with his character. Michelle Phillips, Chynna's mother and Phillips second wife, also stated that she had "every reason to believe [Mackenzie's account is] untrue."[13]

Living with his fourth wife, Farnaz, in Palm Springs, California, Phillips died on March 18, 2001, at the age of 65. He is interred at Forest Lawn Cemetery (Cathedral City) near Palm Springs.[14] He died in Los Angeles of heart failure just days after completing recording sessions for a new album. Phillips 66 was released posthumously in August 2001.

In 1996, a Golden Palm Star on the Palm Springs, California, Walk of Stars was dedicated to Phillips.[15]

This article uses material from the article John Phillips (musician) from the free encyclopedia Wikipedia and it is licensed under the GNU Free Documentation License.

Now Or Never Nick Mellow
Update Required To play the media you will need to either update your browser to a recent version or update your Flash plugin.