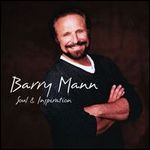 Mann and lyricist Cynthia Weil now operate a publishing company called Dyad Music.[2] Mann's first hit single as a writer was "She Say (Oom Dooby Doom)", a Top 20 song for The Diamonds in 1959. Mann co-wrote the song with Mike Anthony (Michael Logiudice). In 1961, Mann had his biggest hit to that time with "I Love How You Love Me", written with Larry Kolber and a No. 5 single for The Paris Sisters. (Seven years later, Bobby Vinton would take the song into the Top 10.) Also in 1961, Mann himself hit the Top 40 as a performer with a novelty song co-written with Gerry Goffin, "Who Put The Bomp", which parodied the nonsense words of the then-popular doo-wop genre and made the Top 40.[1][3]

Despite his success as a singer with "Who Put the Bomp", Mann chose to channel the bulk of his creativity into songwriting, forming a prolific partnership with Weil, a lyricist he met while both were staff songwriters at Don Kirshner's and Al Nevin's Aldon Music, whose offices were located near the famed composing-and-publishing factory, the Brill Building. Mann and Weil, who married in 1961, helped pioneer the more socially conscious side of the Brill Building-era songbook with hits such as "Uptown" by The Crystals, "We Gotta Get out of This Place" by the Animals, "Magic Town" by the Vogues and "Kicks" by Paul Revere & the Raiders. (Mann and Weil were upset when "Only in America", a song they'd written with the team of Jerry Leiber and Mike Stoller and originally conceived for and recorded by The Drifters as a cynical broadside against racial prejudice, was re-worked by Leiber and Stoller into an uncontroversial hit for Jay & the Americans.)

As of May 2009, Mann's song catalog lists 635 songs.[4] He has received 56 pop, country, and R&B awards from Broadcast Music Incorporated, and 46 Millionaire Awards for radio performances numbering over one million plays.[5] The song "You've Lost That Lovin' Feelin'", co-written with Weil and Phil Spector, was the most played song of the 20th century, with more than 14 million plays.

Mann has composed songs for films, most notably "Somewhere Out There", co-written with Weil and James Horner, for the 1986 animated hit "An American Tail". Linda Ronstadt and James Ingram, who performed the song as a duet over the film's closing credits, saw their version released as a single, which reached No. 2 on the Billboards charts and became a gold record. "Somewhere Out There" would win two 1987 Grammy Awards, as Song of the Year and Best Song Written for a Motion Picture or Television. "Somewhere Out There" was also nominated for a 1986 Oscar as best song, but lost to "Take My Breath Away" from "Top Gun". Mann's other film work includes the scores for I Never Sang for My Father and Muppet Treasure Island, and songs for National Lampoon's Christmas Vacation and Oliver and Company.

Mann co-wrote, with Dan Hill, "Sometimes When We Touch," which hit No. 3 on the Billboard Hot 100.

Mann and Weil were named among the 2010 recipients of Ahmet Ertegun Award from the Rock and Roll Hall of Fame.[7]

This article uses material from the article Barry Mann from the free encyclopedia Wikipedia and it is licensed under the GNU Free Documentation License.

Anywhere Away from Here Rag'n'Bone Man & Pink
Update Required To play the media you will need to either update your browser to a recent version or update your Flash plugin.