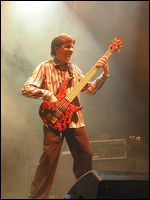 Michael Joseph "Mike" Porcaro (May 29, 1955 – March 15, 2015) was an American bass player known for his work with Toto.[1] He retired from touring in 2007 as a result of being diagnosed with amyotrophic lateral sclerosis (ALS).

He was the middle brother of Toto members Jeff Porcaro and Steve Porcaro. Their father is jazz drummer-percussionist Joe Porcaro.

He is the second of the three Porcaro brothers. The three brothers were taught drums by their father at his drum shop every weekend. Jeff said that he himself wasn't the best drummer, adding that Mike was a better player than him before he switched to bass, while Steve later took up piano before they moved to California.

Porcaro worked as a session bass player before replacing Toto original bass player David Hungate in 1982 shortly after the band completed recording the Toto IV album. Porcaro played cello on a track for the album and subsequently appeared in the band's videos and performed as a full band member on the world tour in support of the album. He remained with the band until 2007.

Along with Toto, Porcaro played numerous sessions in Los Angeles, and toured with Michael Franks on his first tour. He then toured with Seals and Crofts, Larry Carlton, and Boz Scaggs. He appears in the video for the song "JoJo" by Scaggs. In Flames bass player Peter Iwers said that his bass playing style was influenced by Porcaro.[2]

He also played bass on the 1979 Vicki Lawrence album, Newborn Woman, and on the 1987 Bee Gees single, "You Win Again".

Porcaro stopped performing with Toto in 2007 after a growing numbness in his fingers that made it increasingly difficult for him to play. He was replaced by Leland Sklar for the remainder of the tour and Toto disbanded in 2008.[3] In February 2010, it was announced via official press release that Mike Porcaro was suffering from Lou Gehrig's disease and that former band members of Toto, including Steve Porcaro, would reform and do a short tour through Europe in support of him in the summer of 2010.[4] The regrouped Toto continued to tour and perform for Mike's benefit during 2011. [5]

In September 2012, it was reported in Classic Rock magazine that he was doing as well as could be expected with his disease, but he was in a wheelchair as the disease was progressing.[6]

On March 15, 2015, Porcaro died in his sleep at his home in Los Angeles from the disease at the age of 59.[7] He was buried at Forest Lawn Memorial Park in the Hollywood Hills of Los Angeles.[8]

This article uses material from the article Mike Porcaro from the free encyclopedia Wikipedia and it is licensed under the GNU Free Documentation License.

Bitter St dePresno
Update Required To play the media you will need to either update your browser to a recent version or update your Flash plugin.