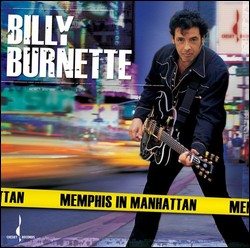 Dorsey William Burnette III (born May 8, 1953 in Memphis, Tennessee) is an American guitarist, singer, and songwriter who was part of the band Fleetwood Mac from 1987 to 1995. Burnette also had a brief career in acting.

The son of Dorsey Burnette and Alberta Burnette, Billy Burnette was born into a musical family. His father and his uncle Johnny Burnette (singer of the 1960 hits "Dreamin'" and "You're Sixteen") were two of the members of the 1950s band The Rock and Roll Trio, which also included Paul Burlison. Johnny had a son named Rocky, born around the time as Billy, who also became a musician. Billy has two sons. Dorsey William "Billy, Jr." Burnette IV works for Bi-Lotec Publishing. Michael Beau, his youngest, is a Nashville artist with a band called Super Shaker.

Billy Burnette made his first recording when he was seven, appearing with Ricky Nelson on the song "Hey Daddy (I'm Gonna Tell Santa On You)" (Dot, 1960).[1]

He toured with Brenda Lee[1] while teaching himself to play guitar. After graduating from high school in 1969, his father took him to Memphis to meet record producer Chips Moman, who had recently finished recording Elvis's songs "Suspicious Minds" and "In the Ghetto". He went with Moman to Atlanta before going to Nashville in 1971 and collaborating with Larry Henley. In addition to songwriting, Burnette spent three years on the road as Roger Miller's rhythm guitarist.

In 1972, Burnette signed with Entrance Records and recorded his debut album, Billy Burnette. In 1979, he switched to Polydor Records and released his second album, again titled Billy Burnette.[1] His third album, Between Friends (Polydor, 1979), contained "What's a Little Love Between Friends",[2] which charted briefly on the low end of the Billboard country chart.[1] The album also had a cover version of "(Sittin' On) The Dock of the Bay" by Otis Redding.[2]

After he signed with Columbia Records, he issued the third album to be called Billy Burnette (Columbia, 1980), his fourth album overall.[3] The song "Don't Say No" reached No. 68 on the Billboard Hot 100. "Honey Hush" and "Tear It Up" were performed by his dad and uncle. "One Night" was a cover of an Elvis Presley song. Videos were made for the tracks "Don't Say No" and "In Just a Heartbeat". The album Gimme You followed in 1981.

In 1985, Eddy Raven ("She's Gonna Win Your Heart") and Ray Charles ("Do I Ever Cross Your Mind") reached the charts with songs written by Burnette.[1] Other artists who have sung his songs include Jerry Lee Lewis, the Everly Brothers, Gregg Allman, Loretta Lynn, Charlie Pride, Tanya Tucker, and Ringo Starr.

In 1986, Burnette released Soldier of Love. The title track peaked at No. 54 and remained on the charts for seven weeks. He was nominated for Best New Male Vocalist by the Academy of Country Music.[1] In 1987 he wrote "(All I Can Do Is) Dream You" for Roy Orbison. Curb released its final Billy Burnette album, Brother to Brother, a compilation with the title song added from the film Gleaming the Cube.

In 1992, Burnette signed with Capricorn Records, which issued Coming Home.[1] Although "Nothing to Do (and All Night to Do It)" was not on the album, it reached the Billboard country chart. Many of the songs from Coming Home were featured in Burnette's acting debut in the film Saturday Night Special. Between 1994 and 1998, he appeared in the films Not Like Us, Carnosaur 3: Primal Species, Casper Meets Wendy, Addams Family Reunion, and Richie Rich's Christmas Wish.

In 1999, he signed with Grand Avenue Records and released All Night Long. Are You With Me Baby, a rockabilly album, followed on the Free Falls Entertainment label. The album had one cover, "Believe What You Say". Between 2001 and 2005, he covered "Copperhead Road" by Steve Earle and "Ring of Fire" by Johnny Cash. He toured as a member of Bob Dylan's backup band and in 2005 became a member of John Fogerty's band.

After a hiatus from solo albums, he released Memphis in Manhattan (2006),[1] which was recorded live by Chesky Records at St. Peter's Church in New York City. The album included cover versions of "Everything Is Broken" by Bob Dylan, "Oh Well by Fleetwood Mac, "Big Hunk of Love" by Elvis Presley, "It's Late" and "Tear It Up" by Rick Nelson, and "Bye Bye Love" by The Everly Brothers.

In 2007, Burnett and Shawn Camp released a bluegrass tribute to Elvis Presley.[1] The album featured thirteen songs previously recorded by Elvis, onto which Camp and Burnette added their vocals.

Burnette met Mick Fleetwood during a taping of Dick Clark's anniversary special. A few months later, Fleetwood invited him to join the band The Zoo. For the Zoo's album I'm Not Me (RCA, 1983) Burnette sang lead vocals on "I'm Not Me"; "Angel Come Home", a Beach Boys song; "Gimme You", a cover of his own song; and "Tear It Up", written by his father.

In 1982, the Zoo performed on Saturday Night Live as the backing band for Lindsey Buckingham, guitarist and singer for Fleetwood Mac. In 1984, Burnette co-wrote the song "So Excited" with Christine McVie, who sang and played keyboards in Fleetwood Mac. The song appeared on McVie's solo album, and Burnette appeared with her on MTV for Christine McVie: The Video Album. He sang on the song "Are You Mine" with Stevie Nicks, another Fleetwood Mac vocalist. The song was intended for Nicks's album Rock a Little but wasn't included. McVie and Fleetwood performed on Burnette's album Try Me (Curb, 1985). Two songs cracked the Billboard Hot 100: "Try Me" and "Ain't It Just Like Love"

When Lindsey Buckingham and Fleetwood Mac parted ways in 1987, Burnette and guitarist Rick Vito were asked to join the band. After the Shakin' the Cage tour, Fleetwood Mac released a Greatest Hits album (1988), featuring two new songs with Burnette and Vito: "As Long as You Follow" and "No Questions Asked". For their next album, Behind the Mask, Burnette wrote "Hard Feelings" and "When It Comes to Love" and co-wrote "In the Back of My Mind", "Do You Know", and "When the Sun Goes Down".

Vito and Nicks left Fleetwood Mac at the end of 1991 and Christine McVie decided to retire from touring. Burnette helped Fleetwood Mac bassist John McVie with his first solo album. Burnette left Fleetwood Mac in early 1993 to pursue a solo and acting career. In 1994, Burnette reunited with Fleetwood Mac. The band featured two new members, vocalist Bekka Bramlett and guitarist Dave Mason. The band toured in 1994 and 1995, and then released the album Time (1995) on October 10, 1995. Burnette wrote "Talkin' to My Heart" and "I Got It in for You" with Deborah Allen. With Bramlett he wrote "Dreamin' the Dream".

After Fleetwood Mac went on hiatus in 1995, Burnette and Bramlett formed the country duo Bekka & Billy. They moved to Nashville and attracted the attention of producer Garth Fundis. They released the album Bekka and Billy in 1997 but they broke up in 1998.

This article uses material from the article Billy Burnette from the free encyclopedia Wikipedia and it is licensed under the GNU Free Documentation License.

What A Song Can Do Lady A
Update Required To play the media you will need to either update your browser to a recent version or update your Flash plugin.