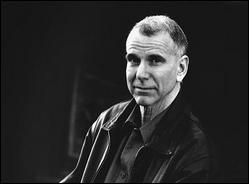 Marc Copland (born May 27, 1948, as Marc Cohen) is an American jazz pianist and composer.

Copland became part of the jazz scene in Philadelphia in the early 1960s as a saxophonist, and later moved to New York City, where he experimented with electric alto saxophone. In the early 1970s, while pursuing his own harmonic concept, he grew dissatisfied with what he felt were inherent limitations in the saxophone and moved to the Baltimore-Washington D.C. area, where he remained for a decade to retrain as a jazz pianist.

He returned to New York in the mid-1980s, his own keyboard style firmly in place. Since that time Copland has enjoyed considerable success, both as a solo performer and a group leader.

Copland was born on May 27, 1948 in Philadelphia, Pennsylvania.[1] He began taking piano lessons at age seven, but stopped abruptly at the age of ten when his public school offered the option of saxophone training. Beginning his career on alto sax, Copland became part of a vibrant music scene in his hometown in the early 1960s, learning and playing with Michael Brecker, a close friend and fellow high school student. In 1965 he briefly studied harmony with Romeo Cascarino in Philadelphia and also began training in composition with Meyer Kupferman and studied saxophone with Joseph Allard, both in New York.

In 1966, Copland moved to New York City, where he attended Columbia University. He became part of a late 1960s and early 1970s New York jazz scene that expanded from the traditional clubs into lofts around the city. During this period, Copland was, along with John Abercrombie and Glen Moore, a member of the Chico Hamilton Quartet. He experimented by adding electronic processors to his alto, culminating in the recording of Friends, an electric jazz album produced by a small New York City start-up label, Oblivion Records. This album, with Abercrombie, Clint Houston, and Jeff Williams, achieved a kind of cult status, earning a five-star review in Down Beat magazine.

Increasingly, however, Copland was writing music with more complex chords that suggested to him an approach to music very different from his acoustic and electronic saxophone work. He came to feel that as an instrument, the saxophone was not a suitable vehicle to fully express his musical imagination. By 1973, he had decided to switch to piano.

For the next decade, Copland labored in Washington, D.C. and Baltimore in relative obscurity while mastering his new instrument. During this period he underwent a kind of apprenticeship, playing with well-known musicians passing through the area who asked for him as an accompanist. Backing up different musicians one week to the next, he worked with artists such as Randy Brecker, Bob Berg, Hank Crawford, Art Farmer, Curtis Fuller, Tom Harrell, Eddie Harris, Harold Land and Blue Mitchell, Dave Liebman, Bob Mintzer, Gary Peacock, and Sonny Stitt. During this time he also led his own bands in local clubs, playing with many of the musicians who lived and worked in the area. One of these, bassist Drew Gress, later moved to New York and over the years has become one of Copland's chief musical collaborators.

In the early 1980s, Copland returned to New York. For a time he returned weekly to Washington to continue private teaching and a steady trio engagement, but after a couple of years these regular visits tapered off in favor of more extensive work in New York City. During this period he worked with Bob Belden, Jane Ira Bloom, Joe Lovano, Herbie Mann, James Moody (with whom he toured for three years), John Scofield, Jim Snidero, and Dave Stryker. A busy sideman, he began to appear with his own bands in local clubs, but remained unrecorded as a leader. Acting on a tip that the Japanese label Jazz City was searching for ten American pianists, Copland sent an audition tape to guitarist/producer Yoshiake Masuo. After listening, the producer called Copland to decline, saying that the label had already reached agreement with ten pianists. A few weeks later Masuo called back to say one pianist had dropped out, and offered Copland his first record deal. My Foolish Heart, Copland's debut disc as leader, was recorded at "The Studio" in Soho, and Copland went on to record two other CDs with the label:

Copland apparently liked the sound at "The Studio" because he recorded several albums there in the following years.

His local trio and quartet gigs and were now more frequent, and as word of his trio spread, he began to play regularly at several venues around the United States, first with Peacock and drummer Bill Stewart, and later, when Stewart was no longer with the original trio, with Billy Hart. This last trio made two albums:

In the 1990s, on the recommendation of Peter Erskine and John Abercrombie, Copland recorded with Vince Mendoza, in the process making the acquaintance of Japanese producer Takao Ogawa. A few years later Ogawa and Copland bumped into each other in a New York studio, agreeing to meet to discuss recording possibilities. Ogawa subsequently organized and produced Stompin' with Savoy (Savoy), featuring an all-star quintet including fellow Philadelphian Randy Brecker and Bob Berg. Because of the limited distribution in the U.S. of his previous CDs, this release effectively became Copland's American debut. It garnered high praise in the American press, which cited his unique way of re-interpreting the standard repertoire, an approach which was widely copied by younger musicians later in the decade. The release led to three years of touring with the quintet in major clubs around the country. Savoy recorded three other albums, as well as a fourth CD that was never released.

Softly, like the other Savoy albums, was praised for its originality and sophistication, but also received special attention for its presentation of a unified album concept.

The Savoy jazz catalog was largely inactive in the late 1990s, and for a couple of years Copland went unrecorded. But In the mid-nineties Copland had begun touring Europe with his own groups, first in duo with John Abercrombie, and later in trios and quartets. As a result, at the beginning of the millennium several European labels took an interest and began to document his work. These recordings solidified his position as a leading and original voice on his instrument in various contexts; each disc was greeted enthusiastically by the press. His work from 2000 to 2006 can be divided into solo piano work, duos, trios, and quartets:

In Poetic Motion, cross references within Bill Zavatsky's poem of the same title and between the poem and the music are everywhere, increasing the complexity and richness of the artistic experience. In Time Within Time Copland wrote his own verse, which helped unify the theme of "time" that is present in the CD title, the cover photograph, and the musical titles and content.

For years, the duo in jazz was a rarely seen ensemble. Copland concentrated on this somewhat neglected format in many of his recordings between 2000 and 2005. His partners on the various projects played diverse instruments, including alto sax, soprano and tenor sax, guitar, bass, and trumpet:

A final duo release from this period featured Copland in duets with another pianist with a harmonically advanced bent, the American Bill Carrothers:

Perhaps the album most responsible for opening the door to wider public acceptance for Copland during the new millennium was his return to the trio format with his regular working band of the period, with Drew Gress on bass and Jochen Rueckert on drums. The album was an application of the pianist's lyrical bent to the interpretation of ballads, a song form that lends itself naturally to his style. The trio developed the rapport evident on the album through several years of steady gigs in New York, and USA and European tours. Another and very different trio, with Kenny Wheeler and John Abercrombie, was a meeting of three individualist instrumentalists and composers. This latter trio recorded twice, and also toured Europe frequently:

In the nineties, Copland wrote and arranged extensively for his quintet and quartet; he returned to this format with four CDs in the 2000s. Each featured a fourth instrumentalist familiar with Copland's way of reworking standards, and his sense of original composition:

During this period Copland recorded exclusively with the Pirouet label. His output during this period included mostly trios, but also duos, quartets, and a quintet cd. Some Love Songs recalls his earlier ballad disc Haunted Heart, with the same trio of Gress and Rueckert. Beginning with Modinha, the pianist embarked on the three-volume "NY Trio Series"; he later returned to the trio of Gress and Rueckert for "Some More Love Songs."

The release of Modinha gained considerable attention for its quality, and the trio was frequently cited as having attained a level that placed it in the first rank of the very best jazz piano trios of the last several decades. Down Beat magazine included Night Whispers on its list of the best cds of the decade.

In 2013, Copland became pianist in both John Abercrombie's quartet and Gary Peacock's "Now This" trio. These bands both recorded for ECM:

In 2015 Copland recorded the initial release on his own new label, Innervoice Jazz:

Copland continues to be an exemplar of the lyrical school of jazz pianism. His music, often noted for its innovative harmonic language, nevertheless is widely regarded as easily accessible to the listener. Many reviewers credit this blend to the pianist's use of dynamics and touch, and his distinctive pedal work. His thirty-five releases make him perhaps the most prolific jazz pianist of the new millennium.

This article uses material from the article Marc Copland from the free encyclopedia Wikipedia and it is licensed under the GNU Free Documentation License.

Rain Light Food
Update Required To play the media you will need to either update your browser to a recent version or update your Flash plugin.