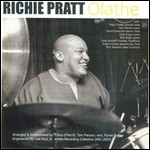 Richie Pratt (born Richard Dean TYREE on March 11, 1943 at Kansas University Med Center then later adopted by JOHN AND WILLA PRATT in the Kansas City area) is a professional musician. He embarked upon a career as a professional musician on the New York scene in the early 1970s, it was as much due to unanticipated intervention as anything else. Pratt was born to a musical family (a brother is saxophonist, Chris Burnett) and grew up in the Kansas City metro city of Olathe, Kansas. He studied music via the piano, as well as, attended various music camps as a youth.

Eventually growing into a rather large and powerful man, he attended the University of Kansas under a full four-year scholarship to play varsity football. While enrolled in school and living in Lawrence, Kansas he would not only block for Pro Football Hall of Fame running back Gayle Sayers as an All-Time KU Football Letterman, but Pratt also continued his musical development. He performed in orchestra, jazz and wind ensembles, along with performing in a student USO show that first took to him to Hawaii as a performer. He was eventually drafted to play professional football by the NFLs New York Giants.

Richie Pratts prolific tenure as a first-call percussionist on the highly competitive New York City music scene began after he suffered a career ending injury during his second season with the Giants. His professional tenure as a musician in New York actually began while he was employed as a Host at the famed Village Gate. Richie began sitting in with Jaki Byard and word began to spread about the big guy from the Midwest who played drums. The great legendary late bassist, Major Holley, eventually invited Pratt to jam on Sundays at Jacques; which resulted in Junior Mance hearing him play drums and offering him his first paid gig as a drummer in New York. Initially described in the New York press as a "bubbling cauldron of musical vitality", Pratt subsequently added musical diversity to his cauldron by performing with the American Symphony Orchestra, the Joffrey Ballet, Alvin Ailey; in the Broadway hits: Ain't Supposed To Die A Natural Death; Dude; Raisin; and notably, Pratt was the drum soloist in Broadway's smashing tribute to Duke Ellington - Sophisticated Ladies.

Pratt remains based in Honolulu, Hawaii where he continues to be an active performer on the local music scene, as well as co-founding and contributing to establishing such local groups as Honolulu Jazz Quartet. Pratt also often works with touring artists, such as the Russian-born trumpeter, Valery Ponomerov, who make the Hawaiian islands part of their itineraries. He signed with the Kansas City-based jazz label, 'ASR Records in 2003. The 2006 commercial and formal record label affiliated debut release as a leader of his own original music on The New York Jazz Sessions (ASR-1007) compact disc has taken 20 years to be realized.

This article uses material from the article Richie Pratt from the free encyclopedia Wikipedia and it is licensed under the GNU Free Documentation License.

Doodlediddle Macy
Update Required To play the media you will need to either update your browser to a recent version or update your Flash plugin.