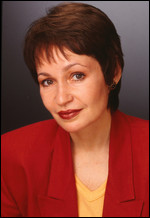 Lynn Ahrens (born October 1, 1948) is an American writer and lyricist for the musical theatre, television and film. She has collaborated with Stephen Flaherty for many years. She won the Tony Award, Drama Desk Award, and Outer Critics Circle Award for the Broadway musical Ragtime and was nominated for two Academy Awards and two Golden Globe Awards for the animated Twentieth Century Fox film Anastasia. She is a mainstay writer for ABC-TV's Schoolhouse Rock.

Ahrens was born in New York City, graduated from Neptune High School on the Jersey shore, and graduated from Syracuse University with a degree in Journalism and English. She is Jewish.[1]

She then began a career in advertising as a copywriter, but was invited to work on a children's television show, and began writing songs for Schoolhouse Rock.[2] She subsequently worked as a freelance composer and singer of commercial music, and wrote and produced a number of songs for children's television, particularly Captain Kangaroo. She began writing for the musical theater in 1982.

Ahrens met Stephen Flaherty at the BMI Workshop in 1982 and they started working together the following year. Their first musical together was Lucky Stiff, which premiered Off-Broadway at Playwrights Horizons in April 1988. Their next musical was Once on This Island, which premiered on Broadway in 1990 and which was nominated for eight Tony Awards. My Favorite Year opened at the Vivian Beaumont Theater in Lincoln Center in October 1992 but ran for only 36 performances.

Seussical opened on Broadway on November 2000, and received a Grammy nomination. The musical later ran Off-Broadway in 2007, where it was nominated for the Lucille Lortel Award as Outstanding Revival and the Drama League Award as Distinguished Revival of a Musical. This is one of the most performed musicals in the US.[3] Ahrens and Flaherty's next musicals, A Man of No Importance (2002), Dessa Rose (2005), and The Glorious Ones (2007) were produced at the Mitzi E. Newhouse Theater in Lincoln Center. They have frequently worked with director and choreographer Graciela Daniele.

They wrote original songs for the Chita Rivera autobiographical show, "Chita Rivera: The Dancer's Life," in 2005.[4]

Their musical version of Rocky the Musical premiered in Hamburg, Germany in October 2012. The show is based on the film Rocky and has a book by Thomas Meehan.[5][6] Rocky the Musical is expected to premiere on Broadway at the Winter Garden Theatre in February 11, 2014 (previews), officially on March 13, 2014. The musical is directed by Alex Timbers, with boxing choreography by Steven Hoggett and choreography by Kelly Devine. The current occupant of the Winter Garden Theatre, the musical Mamma Mia!, will transfer to the Broadhurst Theatre later in 2013.[7] Andy Karl and Margo Seibert are expected to be featured as Rocky Balboa and Adrian.[8]

They have written a dance musical, Little Dancer, with direction and choreography by Susan Stroman, about a ballerina and Edgar Degas, which had a reading in 2010 at Lincoln Center Theater[9] and a developmental lab production in June 2012.[10] Little Dancer is expected to premiere at the Kennedy Center, Eisenhower Theater in October 2014 and will star Rebecca Luker and Boyd Gaines.[11]

Charles Isherwood wrote of Ahrens and Flaherty: "a few composers and lyricists continue to risk irrelevance by pursuing their own lonely paths. Stephen Flaherty and Lynn Ahrens are among them. Mr. Flaherty and Ms. Ahrens, best known for their score for "Ragtime," continue to see the humanist potential in the medium. They insist on writing musicals that explore the struggles of men and women, as opposed to the synthetic creatures razzle-dazzling Broadway audiences with their preening vulgarity and self-devouring jokes."[12] On her working relationship with Flaherty, Ahrens has commented, "Our lives have been very different . . . But our sensibilities are very similar."[1]

Ahrens and Flaherty also collaborated on songs for the animated movie Anastasia (1997),[13]receiving two Academy Award and Golden Globe nominations for Best Song and Best Score. The end title song "At The Beginning" went to Number One, and the soundtrack went Gold.

Ahrens has written music and lyrics for and performed on the animated television series Schoolhouse Rock and Captain Kangaroo since 1973.

With Stephen Flaherty, she wrote lyrics for the title song for "After the Storm," the documentary film about young Hurricane Katrina Survivors putting on "Once On This Island."

Ahrens writes short stories which have appeared in The Kenyon Review, Calyx, Glimmer Train Stories and others. Her personal essays have appeared in Narrative Magazine[16] and have been nominated for "Best American Essays" and the "Pushcart Anthology".

Ahrens and Flaherty gave a series of concerts of their work in Hobart, Melbourne and Sydney, Australia from September 4 to 13, 2009.[17]

She wrote text for the concert piece "With Voices Raised," (composer, Stephen Flaherty) which was commissioned by the Boston Pops Orchestra in 2000.

She wrote text for the concert piece "The Dream Lives On: A Portrait of the Kennedy Brothers," (composer, Peter Boyer), which was commissioned and performed by the Boston Pops in 2009, and narrated by Robert De Niro, Ed Harris, Morgan Freeman and Cherry Jones.

She was the original writer and singer of numerous jingles, including the long-running "What Would You Do For A Klondike Bar" and "Bounty, The Quicker Picker Upper."

She wrote lyrics for the choral piece, "The Song I Sing," (composer, Stephen Flaherty), commissioned by the Young People's Chorus of New York, and performed at Carnegie Hall by a chorus of 1000 children.

This article uses material from the article Lynn Ahrens from the free encyclopedia Wikipedia and it is licensed under the GNU Free Documentation License.

Ahead of the Game Gary Kemp
Update Required To play the media you will need to either update your browser to a recent version or update your Flash plugin.