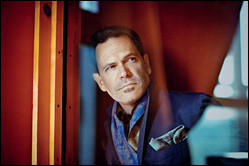 Kurt Elling (born November 2, 1967) is an American jazz vocalist, composer, lyricist and vocalese performer. Born in Chicago, Illinois, and raised in Rockford, Elling first became interested in music through his father, who was Kapellmeister at a Lutheran church. Growing up, Elling sang in choirs and played various musical instruments, but was not exposed to jazz until he attended Gustavus Adolphus College. Elling enrolled in graduate school at the University of Chicago Divinity School, but left school one credit short of a master's degree to pursue a career as a jazz vocalist.

Elling began to perform around Chicago, scat singing and improvising his own lyrics. He recorded a demo in the early 1990s and was signed by Blue Note Records, releasing a total of six albums with the label. He has been nominated for ten Grammy Awards, winning Best Vocal Jazz Album for Dedicated to You (2009) on the Concord Jazz label. Elling often leads the Down Beat critics poll, and he was awarded the Prix Billie Holiday from the Académie du Jazz. Since 1995, Elling has collaborated with pianist, composer, and arranger Laurence Hobgood, leading a quartet that regularly tours the world.[1]

Kurt Elling was born in Chicago, Illinois on November 2, 1967, the son of Henry and Martha Elling. His interest in music started with his father, who was Kapellmeister at a Lutheran church.[2] Elling attended elementary school at St. Paul Lutheran School in Rockford,[3] and throughout his early years, he sang in choirs and played violin, French horn, piano, and drums. During his middle school years, Elling remembers watching Tony Bennett and the Woody Herman band on television and imagining what it would be like to sing with a band.[4] Growing up, Elling sang in the classical style, learning counterpoint from the motets of Johann Sebastian Bach.[5] At Rockford Lutheran High School, in Rockford, Illinois, Elling continued to sing in the choir: "When it was undeniably uncool and geeky and all that, to be the choir, I did it anyway, because it was reliably beautiful, and it was rewarding, and it gave me gifts of experience and friendships." One of these experiences was that of singing the National Anthem with the high school madrigal choir, "Joyful Sounds," under the direction of Joyce Kortze in front of his first large crowd of over 40,000 people.[6]

Elling attended Gustavus Adolphus College in St. Peter, Minnesota, where he majored in history and minored in religion. In college, Elling sang in the 70-voice Gustavus Choir, an a cappella choir that performed works from a variety of different composers, allowing him to hone his technical skills.[5] Elling also toured Europe with his college choir.[6] He first became interested in jazz at Gustavus Adolphus, listening to Dave Brubeck, Dexter Gordon, Herbie Hancock, and Ella Fitzgerald, among others.[7]

After graduating from Gustavus Adolphus in 1989, Elling enrolled in graduate school at the University of Chicago Divinity School where he studied for his master's degree in philosophy of religion.[4] Elling thought about continuing work in academia or working for the World Council of Churches when he graduated.[2] Elling began playing jazz gigs once a week during graduate school, with one of his first shows at Milt Trenier's, a basement club in Chicago (now defunct). Elling earned little money at these gigs, but Karl Johnson, the house pianist, was his mentor and teacher.[8] Elling recalls: "By day I was reading Kant and Schleiermacher, trying to get a handle on that, and at night I was sitting-in in clubs, and, of course, you can't do both and be effective. Eventually Saturday night won out over Sunday morning."[9] Elling remained a graduate student until January 1992, when he left school one credit short of graduation.[10]

In Chicago, Elling held day jobs to survive, working as a bartender and even as a mover. Elling made extra income singing at weddings in addition to playing at clubs. At this time, he began singing in a scat style and improvising his own lyrics.[7] Elling began listening to the vocalese of jazz singer Mark Murphy, who exposed him to the poetry of Jack Kerouac. The minimalism and emotion of Chet Baker's music was also influential.

While living in Chicago in 1995, Elling decided he was ready to record. He had met pianist Laurence Hobgood through Ed Petersen, who played the Green Mill on Monday nights. Elling convinced Hobgood that he was ready to go into the studio, and they came out with nine solid songs. Following the advice of pianist Fred Simon, the cassette recording was sent to Bill Traut, a manager in Los Angeles, who eventually gave it to Bruce Lundvall of Blue Note Records.[11]

In 1995, Elling was signed to Blue Note, and the songs on the demo became the Grammy nominated label debut, Close Your Eyes (1995).[12] The album features Edward Petersen and Von Freeman on tenor saxophone, Dave Onderdonk on guitar, Laurence Hobgood on piano, Eric Hochberg and Rob Amster on acoustic bass, and Paul Wertico on drums.

Close Your Eyes was followed several years later by The Messenger (1997),[13] with Elling releasing a total of six albums for the Blue Note label.

In 1999, Elling became a National Trustee for the National Academy of Recording Arts and Sciences, and in 2003, he was elected vice-chair and served two terms.

In 2006, Elling performed on the television program Legends of Jazz, in the episode "The Jazz Singers". Elling sang "She's Funny That Way" and performed a duet with Al Jarreau on "Take Five". The recording was released on CD and DVD. In August of the same year, Elling signed a new record contract with Concord Jazz, and his first album with the label, Nightmoves, was released in 2007.

The follow-up, Dedicated to You: Kurt Elling Sings the Music of Coltrane and Hartman (2009), is a tribute to the 1963 recording John Coltrane and Johnny Hartman, widely recognized as one of the all-time finest jazz vocal albums.[14] The album arose out of a 2005 concert commissioned by the Chicago Jazz Festival, showcasing the Coltrane-Hartman material. Later, Elling and pianist Laurence Hobgood rearranged the music, culminating in a performance in the Allen Room at the Lincoln Center for the Performing Arts in New York. The concert was recorded in January 2009 and the album was released in June.[10]

Elling is a baritone with a four-octave range, and a writer and performer of vocalese, the art of writing and performing words over improvised jazz solos. In 2007 and 2012, Circumstantial Productions published two editions of Lyrics: Kurt Elling, collections of Elling's vocalese lyrics, edited by Richard Connolly.

Until November 2013, Elling's band included musical director Laurence Hobgood on piano, John McLean on guitar, Clark Sommers on bass, and drummer Kendrick Scott. In Howard Reich's November 6, 2013 column "My kind of Jazz" in the Chicago Tribune, it was reported that Elling and Hobgood would be going their separate ways. Hobgood linked to that article from his own website. Elling's website also announced the change on November 12, 2013.[15]

The band included a rotating series of pianists until October 2015 when Gary Versace became Kurt Elling's first-call pianist and was added to the Band page on Elling's website. Then in August 2016, Stu Mindeman took over as piano chair and Versace's page was moved to Extended Family.[16]

In 1996, Elling married dancer Jennifer Carney.[17] Their daughter Luiza was born in 2005.[18] In the same year, the Ellings purchased a condominium from Barack Obama in Hyde Park, Chicago.[19] The Ellings moved to New York in 2008.

Elling has won the Down Beat Critics Poll thirteen times, from 2000–2012, and the Down Beat Readers Poll seven times and the JazzTimes Readers' Poll eight times, all in the Male Vocalist of the Year category. He has also received the Jazz Journalists Association Male Singer of the Year award eight times. In 2010 he was awarded the Edison/Jazz World award for The Gate. The Edison is the Dutch equivalent of a Grammy. In 2012 he was honored as the first Jazz Ambassador at the Silesian Jazz Festival in Poland, and he also won the German ECHO Jazz award and the Scottish Jazz Award – International category. In 2013 he was named International Jazz Artist of the Year in the Jazz FM Awards (UK).[20]

The Grammy Awards are awarded annually by the National Academy of Recording Arts and Sciences of the United States. On January 31, 2010, Elling won his first Grammy Award in the category of Best Jazz Vocal Album for the album Dedicated to You: Kurt Elling Sings the Music of Coltrane and Hartman on the Concord Jazz label.[21]

This article uses material from the article Kurt Elling from the free encyclopedia Wikipedia and it is licensed under the GNU Free Documentation License.

Stand Above Me Orchestral Manoeuvres In The Dark
Update Required To play the media you will need to either update your browser to a recent version or update your Flash plugin.