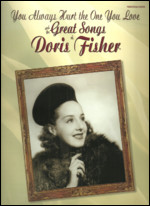 Fisher was born in New York, the daughter of noted songwriter Fred Fisher. She performed with big bands, on the radio, with the Eddie Duchin Orchestra and led the group "Penny Wise and Her Wise Guys".

Fisher's hit compositions included "You Always Hurt the One You Love", "Into Each Life Some Rain Must Fall", "Amado Mio", "Put the Blame on Mame", "Let's Stay Young Forever" and "That Ole Devil Called Love".

Fisher was so popular in the 1940s that she was known as the "Queen of the Juke Box."[1] The pianist and singer Michael Feinstein, a friend of hers, praised her tenacity and talent in what at the time was a man's world.[1]

She retired from the music industry in 1949 to raise a family in Detroit, Michigan. Doris Fisher died in Los Angeles, California.

This article uses material from the article Doris Fisher (singer) from the free encyclopedia Wikipedia and it is licensed under the GNU Free Documentation License.

Zach Braff Movie Song Chez Lim
Update Required To play the media you will need to either update your browser to a recent version or update your Flash plugin.